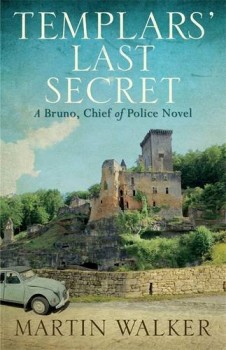 When the body of a woman is found in front of a prehistoric cave beneath the spectacular ruined castle of Commarque in the Dordogne, Inspector Bruno Courrèges, Chef de Police in the nearby town of St Denis, is called to the scene. The dead woman seems to have fallen to her death climbing the steep walls of the castle, and has left behind her some mysterious graffiti.

The castle is known for its association with the order of the Templars and, curiously, a cow’s horn has been left near the woman’s body, in a pose evocative of the famous ‘Venus of Laussel’, a prehistoric carving of a female figure with a horn in her hand. The woman carried no identification and her fingerprints aren’t on any police files.

As well as the investigation into the woman’s death, Bruno has to contend with having an observer foisted on him. Amélie Plessis, an attractive young black woman is conducting a study on behalf of the Ministry of Justice into the working relations between municipal police and the gendarmes. Naturally, Bruno isn’t happy about being the subject of a time and motion study, but he soon finds Amélie’s far superior grasp of internet research and social media to be a help rather than a hindrance.

I must admit that I groaned as soon as Amélie was introduced, expecting yet another girlfriend du jour or, in this case, du semaine, as these have started to become as much of a feature of the series as the local cuisine and customs. But on this occasion, I was pleasantly surprised when she didn’t become Bruno’s latest love interest. But boring Pamela is still around, and there is an appearance by Isabelle, still the love of Bruno’s life, so he isn’t cast entirely adrift in the romantic stakes.

There are times when I felt the book was hopping from one mini info dump to the other, but as long as nothing bad happens to Balzac the basset hound, I’ll continue to give these a free pass, and to a large extent, they’re part of the books’ charm.

The book romps along at a decent pace, merging the prospect of Templar treasure with modern day terrorism and the search for new archaeological discoveries. I was a tad unconvinced by the methods used to search for new caves underneath the castle of Commarque, but was thoroughly entertained by a dangerous siege in a well-known local tourist spot, which brings back some characters from Walker’s first book set in this region, the brilliant Caves of Perigord, which first introduced me to his work.

The book is set against the backdrop of the region getting ready to open its next biggest attraction, Lascaux 4, the latest replica of the world-famous decorated cave in the town of Montignac. These passages make it plain how much the French revere their ancient monuments, and if you are ever in the area, add this – as well as the castle of Commarque – to your list of places to visit.

Walker’s love of the area shines as brightly as ever, and if reading of Bruno’s latest adventures doesn’t make you want to visit the area, I’ll be very surprised!