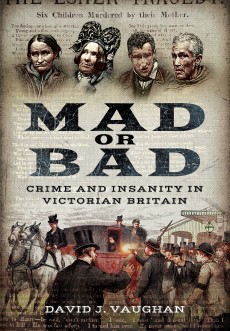 Mad or Bad: Crime and Insanity in Victorian Britain

A history of the insanity plea and how ‘mad doctors’, judges and the public reacted to claims some criminals weren’t bad, just mad.

In the early 19th century, two court cases changed the law by arguing that if a defendant was mad, he could not stand trial, nor could he be held responsible for his actions. The result was an outcry as judges and the public alike feared this development gave bad people a chance to escape justice. In the following years, the classification of different types of madness, and how criminals who claimed to be insane should be treated, were tested in case after case. This book traces that development and shows the often contradictory nature of the outcomes of insanity plea cases.

The book is essentially in two parts: it starts with background material on the insanity plea, then the rest of the book is devoted to accounts of 25 criminal cases where the defendant pleaded insanity. The cases are drawn from across the country, and span the whole of the Victorian period. Pleasingly, they include the infamous, such as Amelia Dyer, and the obscure – it’s not just a rehash of old favourites.

The reference material includes a glossary, a who’s who of judges and ‘mad doctors’, a list of insanity conditions, and a list of relevant statutes. There is a chapter outlining the history the insanity plea, and a separate chapter on the treatment of women and the particular types of insanity they experienced simply through having a womb.

The material is rigorously researched and the cases are presented in an easy to read style. Its weakness, though, is its organisation. The glossary, who’s who and list of maladies are fascinating stuff, but they belong at the back of the book, in the appendices, not at the front. Bizarrely, the cases are arranged in alphabetical order: they would have more impact if they were either arranged chronologically so the reader can see the development of the insanity plea, or grouped into different types of insanity.

The chapter on the history of the insanity plea is introduced with a caveat that it is ‘necessarily brief and staccato’, but the staccato style makes the material confusing. A meatier narrative would be a better introduction to the cases, and do more justice to the obvious scholarship and research that has gone into this book.