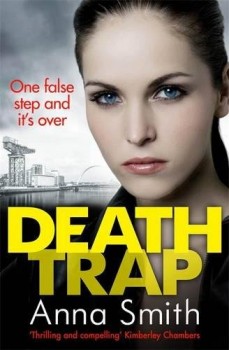 As a former crime reporter for a group of national newspapers, I am always slightly dubious when all Rosie Gilmour’s investigations somehow turn into dangerous and dramatic crises featuring international crime. But as a reader I am absolutely hooked!

Anna Smith’s strength, based on a stellar 20-year career at home and abroad, winding up as chief reporter of the Daily Record, is that she can seamlessly meld international events such as the Balkans wars, the refugee crisis and drugs smuggling into a background of city crime in Glasgow and make it all believable through the sheer pace and power of her writing.

This time her major focus in on the evil of modern day white slavery, usually featuring illegal immigrants or visa over-stayers, often refugees from the wars and uncertainties of eastern Europe and their ruthless exploitation. To combine this with the hunt for a sadistic serial killer who, in the course of escaping from custody, has murdered a policeman, is a work of literary art. And Smith succeeds effortlessly.

Glasgow is in virtual lockdown after Thomas Boag flees his first court appearance on a charge of a brutal homosexual murder. He is also a suspect in two other disappearances.

Rosie’s earlier investigation provided evidence to arrest him. A courtroom exchange makes it clear he will seek revenge. Under the restraint of a 24-hour police guard, she tries to distract herself with a new story – refugees trafficked into Glasgow and used as modern-day slaves, her interest fired by the plight of a Kosovan refugee charged with killing a seagull because he was starving.

This investigation leads her into the often dangerous territory of the traveller gangs and to a meeting with a Glasgow crime lord seeking revenge for Boag’s killing and dismemberment of his son. Meanwhile, somewhere out there, Boag is laying his trap.

This high-octane story is, as always, really fast paced from the first chapter and never loses its sense of urgency. But this time there is a difference. Whatever dangers she has faced, Rosie has always retained her ‘gallus’ attitude – that so-Glaswegian bold, cheeky, or even flashy, front. This time we see a much more vulnerable and nervous version, almost as if she is suffering from PTSD, which makes for a good deal more realism. And realism is the key to Smith’s continuing success, as her stories are straight from the headlines.

All the usual characters return. Rosie’s on-off partner TJ, her one-time lover and Bosnian protector Adrian, her go-anywhere for an exclusive picture photographer Matt and her top police contact and pal Ron all feature.

The series – this is Rosie’s eighth adventure – has been gathering pace. She has always been determined to get her story, whatever the cost and often with little regard for the letter of the law, but always according to her own morality. But by the end of this story she appears to have crossed that invisible line near which no reporter – or policeman – should ever venture.

I’m frankly jealous of Rosie – my career offered nothing half as exciting or dangerous! Death Trap is another searingly-paced and all-too-believable look at the darker side of life from a quite brilliant writer.