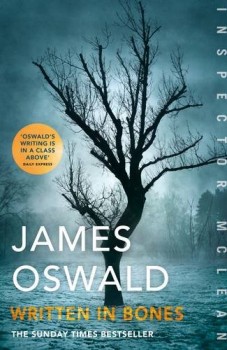 Detective Inspector Tony McLean is called to the scene of a horrific death in one of Edinburgh’s parks. A naked man has apparently fallen from thin air to end up horrifically impaled in the branches of a tree. The only witness is a young boy out for an early morning walk with his dog, but as the boy thinks the dead man was dropped by a dragon, he’s not a lot of help to the investigation.

When the dead man turns out to be a disgraced drug-pushing ex-copper who has latterly re-invented himself as the boss of a charity helping drug addicts, there’s potential all round for embarrassment as the press turns its collective eyes on the investigation into the death of Bill Chalmers. Most of his bosses seem to have served with Chalmers, so the poisoned chalice gets handed to McLean. The obnoxious Detective Superintendent Brooks is determined to keep McLean on a short-leash; DCI Mike Spence is as argumentative as ever, and certainly no fan of McLean’s and as if that wasn’t enough, the oily Deputy Chief Constable Steve ‘call-me-Stevie’ Robinson is also sniffing around.

McLean is never one to stay on the straight and narrow in any investigation and he’s soon off on a tangent, this time following a hunch concerning the father of the young boy who found the body. Tommy Johnson was one of Edinburgh’s more notorious club owners, whose activities had been brought to an abrupt end by an unsolved shooting. McLean’s bosses soon do their best to shut down what they see as a flight of fancy but, as ever, their DI is determined to plough his own furrow.

Tony McLean is one of my favourite police characters, even though the dreaded m- word definitely applies to him, and usually I have a low tolerance for so-called maverick coppers. McLean does the job because he loves it, not because he needs the money, which makes him a hard man to control. He shares the huge house he inherited from his grandmother with girlfriend Emma, newly returned to her job as a crime scene technician, and the moggy who deigns to share a house with them, the wonderfully named Mrs McCutcheon’s Cat. And yes, there is a story behind the name, so do go back to read the rest of the series. It’s definitely worth it.

Written in Bones combines James Oswald’s flair for plotting an entertaining police procedural, with his talent for peopling his stories of the darker side of Edinburgh with well-drawn characters such as McLean’s one-time nemesis and now reluctant ally, his former boss, ex-Detective Superintendent Charles Duguid. The uneasy truce between these two is always one of the things I look for in the series.

As ever, there’s always a faint hint of an even darker shade of Edinburgh noir, as tendrils of something not quite normal weave themselves in and out of the story, especially where the incredibly rich Jane Louise Dee is concerned. Oswald has a light touch when it comes to shadows of the supernatural, and long may it continue.