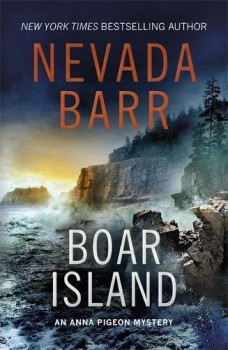 National Park Service Ranger Anna Pigeon must solve a crime that’s too close to home when her friend’s daughter becomes victim to a cyberbully-turned-stalker.

This is the first time that National Park Service Ranger Anna Pigeon has come face to face with cyberbullying. Obscenities, rumours and hatred fly around the internet, all pointing at Elizabeth, the daughter of Anna’s paraplegic friend, Heath. In desolation and shame, Elizabeth attempts suicide. Heath’s aunt Gwen, Anna and Heath decide to get Elizabeth as far from the problem as possible. As Anna is on a temporary posting to Maine, Heath, Gwen and Elizabeth uproot for the summer and go to stay near Anna on otherwise uninhabited Boar Island.

But the stalker tracks them down, and Heath realises they are not alone on the island. That is not Anna’s only problem. She has hardly unpacked when a local man is murdered, shot three times at close range.

I was looking forward to a less-travelled mystery, with its combination of cyber-crime, a paraplegic mum and an adopted daughter at its heart. Nevada Barr certainly writes with confidence on teenage girls, paraplegics and cyberbullying, but it felt more that these elements were there to spice up or add shock factor to a predictable and well-worn plot. Moreover, the plot was so riddled with coincidences and conveniences that it had me rolling my eyes on more than one occasion.

For the first two or three chapters, I found Barr’s style of writing interesting. She has fresh, if intense, eyes on the ordinary as well as the extraordinary. Sentences burst with similes and metaphors. And although it is written in the third person, the story oozes with introspection. Unfortunately, after a while, this intensity detracts from what is essentially a cosy crime. The style almost feels overdone to the point of pretentious for the genre, and quite intrusive. It slows the story, and until the climax, where thankfully action and dialogue finally ousted the padding, I found myself saying: “For goodness sake get to the point!”

That said, there are some humorous one-liners, the characters are well developed, and if the reader is an Anna Pigeon series fan or someone who enjoys this style of writing, it is a cosy mystery that touches on the shocking without too much dark.