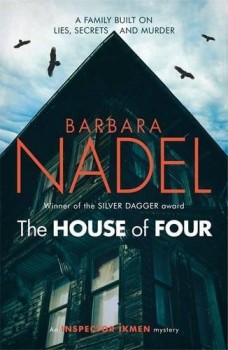 The House of Four

Inspector Cetin Ikmen investigates the death of four siblings, each living on a separate floor of a single apartment building, stabbed by the same hand.

Barbara Nadel has a number of series running: Hancock, and Hakim and Arnold, in the East End of London, and Inspector Cetin Ikmen, working in Istanbul. Ikmen has had far more outings (this is number 20) and after all this time she still finds something interesting to say about the city, even if the inspector is slowing down a bit.

The book opens with two sets of horrific crimes. In an overgrown four-storey building, ‘the Devil’s House’, the occupants, one to each floor, are found stabbed to death. The victims are all of great age and never seen outside of their own floors. Ikmen finds something even stranger: that while the three men and the woman were siblings, they never met, and an occasional exchange of letters was their only communication.

Outside in the streets of Istanbul people are also being stabbed and killed, but in this case apparently at random. A young man making a carpet delivery in a market, a woman on a bus visiting her in-laws, a tourist taking in a river scene; there seems to be no pattern. Ikmen’s protégé Mehmet Suleyman spearheads this investigation, which proceeds slowly; it is some time before a common factor emerges: a young couple, a girl with strange pale eyes.

Ikmen’s investigation into the Devil’s House reveals that the occupants were the children of a German who arrived in Turkey to assist the Ottomans in World War 1, and subsequently stayed. There were some ugly rumours about his cruelty during the war, and about events in the house subsequently. The gardeners to the house were some of the diminished Greek community of Istanbul, and played a part in events.

All this facilitates Nadel’s exploration of the minorities that mix in this ancient city, their historical context and the sometimes terrible events which continue to play a part in the consciousness of the survivors. A sub-plot concerns Barcin, a young attractive constable of Kurdish origin, transferred to headquarters to help with translation from Ottoman script. Barcin welcomes the chance to escape the confines of the traditional male-dominated society into which she was born. Suleyman and Barcin share a mutual attraction but Suleyman’s mistress Gonca, a gypsy, is capable of severe retaliation for any deemed slight.

The mixture of cultures and the different ways they relate to each other is one of the most enjoyable aspects of the Ikamen stories. And there are some fascinating details, like Ataturk’s latinisation of the Turkish alphabet in 1929, which for all its benefits by abandoning the Ottoman script cut people off from their past. I enjoyed this much more than the plentiful conjecture about the devil, which seemed to me a little overdone.