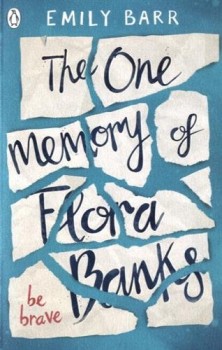 The One Memory of Flora Banks

Flora Banks has been unable to make new memories since she had an operation at the age of ten. Her life is lived through the pages of a notebook that remind her who she is and where she lives. But all that changes when Flora kisses a boy.

Flora Banks is 17. She only knows her age because it’s written in a notebook that tells her who she is and why she can’t remember anything that has happened since she was ten. Flora has a rare condition called anterograde amnesia. This means that she is unable to form new memories. It started when she had a brain tumour removed, or at least that’s what her notebook says, and Flora has learned to rely on her notebook and the series of reminders and instructions that she writes on her arms.

Then, one night, after a party at a friend’s house, Flora kisses a boy called Drake and the following day she can still remember the kiss. The only problem with that is that Drake is her best friend’s boyfriend. Actually, there is another problem; Drake is just about to move to Svalbard, a collection of islands in the North Sea, midway between Norway and the Arctic Circle. It’s the northernmost permanent settlement in the world, and one of Flora’s Rules for Life ends up being: ‘Don’t go to Svalbard in winter’.

When Flora’s parents have to leave her at home while they go to Paris to be with her terminally ill brother, they’re relying on Flora’s best friend Paige to help look after her, but Paige knows about the kiss, and as a result, she isn’t speaking to Flora any more. That presents Flora with an opportunity to follow her heart. For a girl with no memory, getting to Svalbard isn’t easy, but Flora has the words ‘Be brave’ tattooed on her wrist, and she’s determined to see Drake again, because she’s fallen in love with him. She’s also convinced that if she can only find Drake again, he’ll hold the key to unlocking her memories.

The One Memory of Flora Banks is a hauntingly beautiful book, painful but ultimately heart-warming. Flora tells her own story in her own way and her own words. Seeing the world through Flora’s eyes, whilst standing apart from the narrative as an observer, it is hard to know who can be trusted and it is equally difficult to separate the truth from the inherently unreliable narration of a girl with no memory. And therein lies the great strength of this book. Emily Barr thrusts her readers into the swirling maelstrom of Flora’s confused thoughts and newly-awakened emotions. I suffered every setback with her and savoured every triumph, and desperately wanted everything to end happily, but in Flora’s world, nothing is easy, and at times it became hard to cling onto the instruction to be brave.

This is a stunning book, showcasing Young Adult writing at its best. Flora Banks is a main character like no other. Her advice to herself is to live in the moment whenever you can, and this is something you’ll do throughout this book. You’ll need to own a heart of pure granite not to be moved and uplifted by her adventures, even though there are times when her world seems as bleak and as dark as Svalbard in winter.