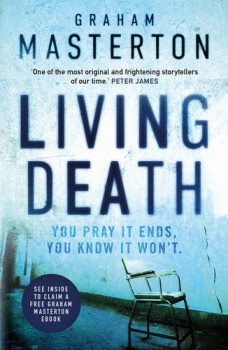 Detective Superintendent Katie Maguire and her team are stretched to their limit. Illegal drugs in Cork are at an all-time high. A gang of dog-nappers is terrorising kennel owners. A girl leaves a nightclub – and disappears. Katie realises the three crimes may be connected.

Graham Masterton, an ex-editor of Penthouse, made his name as a horror writer. And there’s plenty of graphically depicted horror in this convoluted seventh tale of the Katie Maguire series.

The story is unpleasant and at times quite unbelievable. Masterton seems to be writing solely for effect, and his gratuitously nasty and demeaning treatment of his female characters is beginning to jar.

This time he’s added the most corrupt and horrific medical malpractice, which makes Dr Frankenstein look quite normal, and some disgusting depictions of animal cruelty. True, many of these things exist. Illegal dog fights attract millions of euros in wagers right across the west of Ireland. Cities like Cork do have growing drugs problems. But it’s his insistence on going into the most minor and depraved details which detracts from what is actually a clever and devious plot.

Her character, too, is becoming harder and more self-centred. Her once well-rounded, even sympathetic, personality has slipped further into self-absorbed obsessiveness. Bringing a new boyfriend to stay the night in a room next to her crippled ex – who lost his legs because of his connection to her – is the act of a woman without a conscience!

Superintendent Maguire and her team are at full stretch. Illegal drugs are flooding Cork. A girl leaves a nightclub – and disappears. At the same time a gang of dog-nappers is terrorising kennel owners. As her detectives investigate, Katie realises the three crimes appear to be connected, but her enquiries are hampered by her ongoing battle with a corrupt higher command and the constant need to keep on top of the city’s organised crime gangs.

The plot is original, if far-fetched – and the final page totally unexpected – as this hurricane-pace story builds towards an improbable climax. Despite its failings, this is another pacey thriller from a master storyteller. With plenty of unpredictable twists, a superb ear for Irish street argot and some fine descriptive scene setting, it again delivers.

If you have a strong enough stomach to deal with some of the rawer parts and are able to suspend belief for the more unlikely, this is a thriller you won’t want to put down! But if, like me, you enjoyed the early Katie Maguire stories, you may be unhappy with the woman she has become.