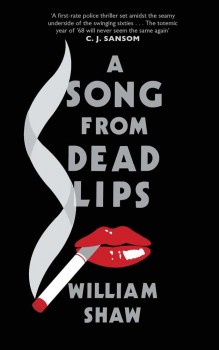 William Shaw has picked what that master of the past CJ Sansom calls “the totemic year of '68” as the setting for his debut novel, but if you have any preconceptions fostered by Life on Mars and its spin-offs, forget them. This is policing as it used to be – racist, sexist, tribal, homophobic, brutal, hierarchical and with the CID as an almost totally separate entity, with all the temptations to corruption of all sorts that distance provides.

All this is evocatively and skilfully set in an era of social turmoil and class conflict, of Beatlemania, the Abbey Road phenomenon, and the other trivialities of a changing lifestyle which saw a British public either unaware or uncaring that its Labour government was quietly acquiescing in the slaughter of around three million Biafrans – and in fact arming the murderous Nigerian Federal forces – for purely commercial reasons.

This is no whimsical look at the past and the weight of the wider issues combine to make this a far more gritty and compelling book than it at first appears. In fact, as these larger themes gather strength, the portrayal of the police characters, originally almost cartoon-like in their simplicity, seems to acquire a greater depth and the period detail transforms from an almost annoying background to become an essential part of an intriguing and disturbing plot.

Detective Sergeant Cathal Breen is a sensitive and deep character, a distinct oddity and out of place in a brutish squad room. Accused of deserting an injured colleague, he becomes the target of their dislike and the butt of some often vitriolic humour. Assigned to the murder of a young girl, he is given would-be detective WPC Helen Tozer as an assistant, but soon finds the impulsive, sociable girl from a Devon farm has her own ideas of what ‘assistant’ means – a prototype libber in the days when a woman’s role in the Met was largely making tea!

Breen, who has a more empathetic approach to both victim and the suspects than would have been fashionable at the time – and a distinctly weak stomach – finds himself drawn to the ballsy girl and the interplay between them provides a very human and genuine heart to the story. Neither has a past without its problems, but as the investigation gathers pace and the strands come together, those begin to fade amid the reality of a series of linked incidents which have effects on, and consequences for, both of them.

Superb characterisation, a vivid recreation of the era, its sights, sounds and prejudices make this a highly enjoyable and readable debut for the pairing, although with Tozer threatening to return to the West Country, a series seems a shade ambitious. I trust that Shaw, who is certainly a name to note for the future, has a plan to subvert this and we shall see this original and likeable couple again soon.