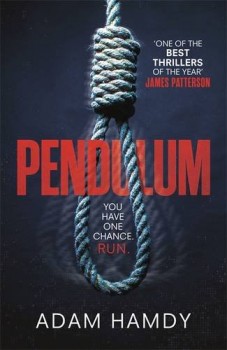 A man wakes to find a noose around his neck. He is about to die. Why has he been targeted?

Pendulum is one of those long-form novels that are tricky to talk about because to look at outcomes about how the story develops spoils tension created in the opening segments. What becomes obvious later is that we have a serial killer on the loose. But the novel begins with former war photographer John Wallace waking up in his apartment with a noose around his neck. The attacker who put it there is dressed in body armour and a mask like a cinema super-hero and intends to make Wallace’s murder look like suicide. Wallace gets one chance to escape.

There is plenty of suspense in the opening pages and, needless to say, the rest of the story explores why Wallace has been targeted and who is his attacker. The action moves between London and New York in this engaging fast-paced thriller, but some of the scenes are far-fetched, the body count is high and our hero has more lives than a cat. There are three threads running through the story – the pursuit of Wallace, the manhunt for the villain and underlying organised cyber-criminality.

Pendulum does offer some interesting considerations about our acceptance of the negative aspects of how the internet and social media has affected society, our ways of communicating with each other and our personal values and judgements. It is interesting to note that these observations are expressed by the villain and not the hero of this tale. When they are revealed the motives of the villain are somewhat understandable, but how he exacts reparation and enforces retribution is draconian.

Pendulum is a morality tale that considers the quality of revenge as justice and how a moment of thoughtlessness could result in such devastating consequences. Adam Hamdy has adapted a number of comic books and novels for the screen and his eye for such visual imagery and ear for sharp dialogue shows through in this novel.