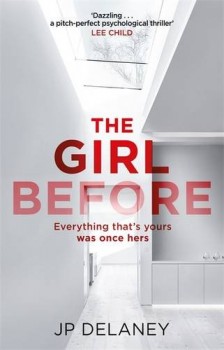 Like Emma had before, Jane can’t turn down the offer of the minimalistic house, despite the rules that go with renting it. But who was Emma, and how did she die?

Then: Emma and Simon are searching for a new place to live after their house was burgled, and Emma held at knife point. But there is nothing in their budget that fulfils Emma’s need for security. Until she sees One Folgate Street.

Now: Jane, still enveloped in grief at the loss of her baby in a tragic stillbirth, is looking for a new home. Her budget is not large, but she too has boxes that need ticking. Although the list of rules is daunting, she, like Emma before, knows the extraordinary One Folgate Street is the place where she can heal.

For a time, they are both happy. Perhaps too happy, with their enigmatic landlord, Edward.

Then: Emma died. Now: Jane wants to know why.

The Girl Before alternates between Emma and Jane, and is written in the first person point of view for both main characters. Delaney has styled the writing of Emma’s story by leaving out speech marks, which despite being unusual, is not difficult for the reader. Unfortunately, that is the largest distinction between the two voices. I found their almost identical voices a let-down right from the start, because Delaney is clearly a confident writer, and could have made this aspect much better. However, the story intrigued me, so I didn’t let it put me off.

The two main characters’ backstories, and equally, Edward’s, are overall handed out in a timely fashion, and as the story progresses, a few surprises give the story a sprinkling of delicious twists. However, Edward could quite easily have made his debut appearance in Fifty Shades or Twilight; the predictable dark, brooding control freak. It seems like this is the latest bandwagon rolling through town, not only in romance writing, but also crime stories.

Unfortunately, for me, his character portrayal, plus the small list of suspects, made guessing the villain all too easy. Furthermore, it left Jane and Emma predictably like their Fifty Shades counterpart.

The milieu and list of rules, almost like main characters in the development of the story, were handled reasonably well. However, I feel the author is relying on most readers not living in a super-minimalist house. It is the unfamiliarity, rather than outstanding descriptions of the house itself that make it ‘scary’. And it is almost unbelievable that three, if not more, people would entertain adhering to such a list of exacting rules and impertinent questions. Almost.

For all the above, crime fiction is as much about escapism as any other fiction, and I was happy to suspend my disbelief and let Delaney sweep me away to another world for an enjoyable evening. This is a gripping, fast-paced, easy read for those who are not overly sensitive, who can cope with rape as a plot tool, and who don’t mind dislikeable characters. I sense similarities between The Girl Before and Gone Girl, so it is no surprise that this will be made into a film. If Delaney can rely on imagination and not jump on bandwagons, I will be looking forward to the next book.