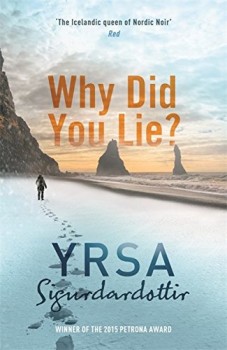 Why Did You Lie?

Four people are stranded in a small lighthouse on a rock surrounded by raging sea. An ordinary couple return from home-swap in America to find their guests apparently missing. A journalist on the track of an old case hangs himself in his own garage. Someone is determined to punish them.

It’s the end of January.  A group of strangers is taken by a helicopter to a remote rock surrounded by an unforgiving ocean. Three specialists to do maintenance work at the tiny Thridrangar lighthouse, and Helgi, an overweight photographer who managed to hitch a ride to this spectacular yet scary place, descend on the helipad the size of a small room. With provisions to last them for only 24 hours they are shocked when informed by a coastguard that they’ll stay there longer due to technical issues with the helicopter. The weather turns worse and as the fog engulfs the little scrap of solid land and the storm approaches, the level of anxiety and despair goes through the cloud roof. The tension affects everyone. Helgi, an outsider, tries to keep some peace though he’s plagued by a recurring terrifying dream: blood on the whitewashed walls, two dead, and a third person fighting for life.

A very ordinary family, Noi, his wife Vala and teenage son return from a house-swap holiday in Florida to find their home in disarray and emanating a strange smell. Their American guests seem to have left in a hurry yet there’s plenty of unusual evidence: missing keys, abandoned clothes… Noi, an IT control freak, goes through security recordings taken at their country chalet, and searches both properties, talks to the neighbours and eventually alerts the police. He hears strange noises, sees flashes of light and finds notes with menacing messages. Vala, a fitness fanatic, dismisses his fears and anxieties. She seems relaxed after a much-needed holiday and so doesn’t get involved but her endless exercise routine upsets Noi.

Nina, a disgraced police officer is given a job of clearing old files and documents in the dusty basement at the station. She is shunned by her colleagues and divides her time between this mundane task and staying by her husband’s hospital bed as his failed suicide attempt has left him on the verge of death. Thröstur, a journalist, was working on the forgotten cases of child abuse but didn’t share any information with her. Nina cannot bring herself to believe that he had any reasons to kill himself. She searches through papers and video tapes to avoid being in her flat whose windows overlook a haunted garage where Thröstur’s body was found. Her small discoveries take her to the possible source of a personal tragedy.

As the story progresses it becomes obvious that all the people have one thing in common: they lied and are now hounded by someone or something determined to punish them.

The thriller’s chill factor permeates different strands of the novel and grows steadily. You might be able to explain how a dead cat’s body ended on a family barbecue. Just. But it’s difficult to comprehend how sinister messages appear in the most isolated places, and whether a human shape in the fog is only a figment of imagination.

The undisputed queen of Icelandic crime fiction weaves three subplots brilliantly until she delivers a shocking final blow to the sensibilities. Mixing ghostly and factual, deeply shameful human emotions and beliefs in the supernatural, Sigurðardóttir yet again creates the disquieting world that will leave you deep in thought. I do hope a movie will follow this spectacularly atmospheric suspenseful story. The stunning visual quality of the writing, in Victoria Cribb’s excellent translation, does not require any aids. However, for this particular novel I would encourage you to look for photos of the Thridrangar lighthouse, off the Vestmannaeyjar islands, just to understand how incredibly well the strong sense of location feels in the story. I was blown away.