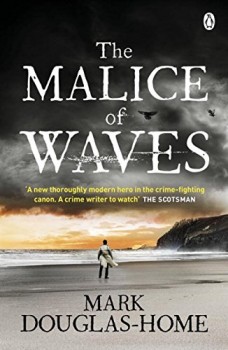 The Malice of Waves

Oceanographer Dr Cal McGill is called in to try to solve the mystery of a 14-year-old boy’s disappearance from a remote Scottish island five years ago.

Five years ago, 14-year-old Max Wheeler spent the night alone on bleak, deserted Priest’s Island, just off the north coast of Scotland. His father owned the windswept scrap of land and Max knew it well, but by the following morning, despite a thorough search, he was nowhere to be found. His father, David Wheeler, blamed the local people on nearby Eilean Dubh, the Black Island, citing the antagonism that followed his purchase and the revocation of generations old grazing rights as a motive.

Every year since then, the grieving father has commissioned a fresh expert to continue the investigation into his son’s disappearance and presumed murder. This time it’s the turn of oceanographer Dr Cal McGill, dubbed the Sea Detective. McGill understands the ocean better than anyone and the hope is that his knowledge of tides, winds and currents will provide the answers that no one else has been able to give.

The tension between the Wheeler family and the local community is immediately apparent, and there are also rifts between David Wheeler and his three surviving daughters. Hannah feels that the last five years has been about nothing more than Max and resists any efforts by her sister Chloe to calm her down, and the eldest daughter, Joss is estranged from her family and now lives in an isolated caravan on Eilean Dubh.

Mark Douglas-Home’s portrayal of a beleaguered community under suspicion of murder is strong and perceptive. They band together against the threat posed by outsiders such as Cal, even while they are divided amongst themselves as to what, or who might have bee responsible for the boy’s death. The bleak yet beautiful landscape of the Outer Hebrides is beautifully depicted, making it easy to visualise each change of scene, from the windswept cliff where ravens nest to the ruined chapel that has been turned into a shrine for the lost boy.

Cal’s investigations are aided by a dead pig called Millie, but in many ways he seems to act more as a catalyst for the simmering tension in the closed community of the larger island, and generally makes less use of his oceanographic skills than he has done in the two previous books.

The theme of loss is strong in Douglas-Home’s series, with Cal still struggling with the fact that his father abandoned him in the wake of his mother’s death to work as a volunteer abroad, and marry a new wife only a few years later. The birth of a son, announced to friends, including Cal, by means of a round-robin email only serves to heighten Cal’s feeling of having been supplanted in his father’s affections. Cal’s empathy with both the living and the dead comes over strongly in The Malice of Waves. He is driven by a desire to bring closure for those left behind, even though he hasn’t yet found closure for himself.

Douglas-Home’s books are well-plotted, with all strands wrapping up neatly, whilst never seeming contrived. The sub-plot in this book of the theft of rare birds’ eggs is woven in cleverly, providing fascinating insights into the single-mindedness of the collectors and the lengths to which they’ll go to seek out and acquire new finds.

The Sea Detective series is going from strength to strength. With all of Scotland’s rugged and beautiful coastline at his disposal, I’m sure I won’t be long before Dr Cal McGill is called on to employ his unusual knowledge again for the benefit of those left behind to wait and hope.