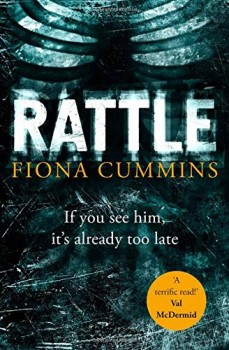 There is a sinister, thin man who collects abnormal skeletons by harvesting people, particularly children. There is a family with a child with a serious bone disease. The sinister man is hunting.

Erdman Frith and his wife, Lilith have a charming little boy, Jakey, who has Fibrodysplasia Ossificans Progressiva, a condition where additional bones grow in his body, and which grow faster if he is injured in any way. DS Etta Fitzroy is a police officer, haunted by an unsolved child abduction and now involved in two further cases. The Bone Collector is a sinister and spectral figure malevolently pursuing children with skeletal abnormalities to extend the collection started by his father.

Fiona Cummins has structured this novel very carefully. Her use of short chapters and the separation of the book into daily sections feed the tension and build up of the plot. The different personalities of the various protagonists are built up subtly, with minimal information but with precise, pertinent information. I found myself easily empathising with each of the characters, whether they were likeable or not.

The Bone Collector is described differently. To start with he is a shadow figure, like something from a 1970s horror movie. As the story develops and the reader finds out more about his background, character and personality he becomes increasingly three-dimensional. He is a truly horrific character, whose callous longings are made more terrible by the occasional appearance of sympathetic or loving thoughts. The detail of his practices is flesh-creepingly described, literally so.

The book contains moments of real pathos. The utter sense of loss experienced by the parents in the book. The conversation between two abducted, imprisoned and very scared children. The inability of a father to reveal his whereabouts to prove his innocence because of the harm that his disclosure would cause.

The book is rich in description, in character and in plot. I really could not put it down. This is Cummins’s first novel and I look forward to future books. I really hope that we will meet some of these characters again.