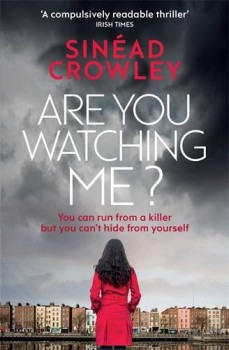 Are You Watching Me?

Liz Cafferky’s championing of a drop-in centre for older men catapults her into the media limelight, but that brings with it pressures and fears that she hadn’t foreseen.

Liz Cafferky becomes the darling of the Dublin media when she makes an impassioned plea on behalf of the least fortunate in society: the homeless, the lonely and the addicted. The Tír na nÔg drop in centre isn’t just a refuge for men. It is also a life-saver for Liz, rescued from her own dependence on alcohol by Tom, who runs the centre. Tom picked her up from the gutter, almost literally, stood by her through difficult times and gave her a job, so Liz is keen to do something to help.

She does a good job of raising public awareness and that brings much-needed donations to the struggling centre but her sudden high media profile also brings unexpected problems. Liz attracts the attention of Stephen, a man who was bullied at school and abused by his father. He develops an unhealthy obsession with Liz, collecting press cuttings about her and devouring everything he find online. In his eyes, he becomes Liz’s biggest fan and wants to get close to her.

When Liz starts to receive some notes purporting to come from an admirer, she at first dismisses them as harmless but when one of the centre’s clients is murdered in his own home, things take a more sinister turn, and Liz is told that she might be next. In an attempt to put things out of her mind, Liz destroys the notes so when she finally does pluck up the courage to go to the police, there is little or nothing for them to go on.

The book’s other lead character, Detective Sergeant Claire Boyle, who made her first appearance in Sinéad Crowley’s impressive debut, Can Anybody Help Me? is back at work following the birth of her daughter and already finding it difficult to juggle her job and her home life. But one of the things that sets Claire and her husband apart from most fiction police marriages is that they they’re still capable of settling their differences with a degree of humour, something all too often lacking in the dismal procession of disintegrating relationships that this genre so often serves up.

Crowley provides an engaging mix of police procedural and psychological thriller that proceeds at a good pace, avoids clichés and manages to throw up some good twists and turns without telegraphing them a mile ahead. Are You Watching Me? builds nicely on Claire Boyle’s first appearance and looks set to carve out a very respectable niche for her in Irish crime fiction.