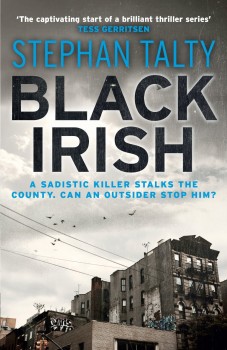 How nice to find a cop thriller which ignores the formulaic mould. Corruption? Enough to be believable. Flawed personalities? Plenty, but given the subject matter, hardly surprising. Non-fiction author Stephan Talty's fiction debut presents a crisp, no-nonsense style, sharp dialogue and enough dark humour to balance the appalling violence he describes – and this is a story born out of violence and with more than its share of darkness.

His lead character is detective Absolom Kearney, adopted daughter of a police legend in Buffalo, New York, a crumbling lakes city where the closed and secretive Irish community regard their neighbourhood as the 27th county of their mother country, together with all the baggage of its bloody history – and all respectable cops are big, Irish and male.

There’s no messing about with Talty.  The story opens with a brutal murder, followed by others. Each killing is ‘signed’ by a toy monkey. Abbie believes the killer has a personal agenda targeting members of an IRA-affiliated ‘social group’ with its own nasty secrets. Her own father is somehow connected and a potential victim.

Talty himself is a first generation Irish immigrant from County Clare and his characters are realistic and have smart, credible dialogue. His descriptions of his home town – dying on its feet and real symbol of America’s new ‘poor white’ underclass – make the story even more believable. The back story of its Irish community is skilfully evoked and provides a truthful setting – I’ve been in the bars and Gaelic clubs in Boston and New York that he has down to a T. The pace is always snappy and increases with the number and ferocity of the killings which Talty handles with a confidence which in some ways minimises their sheer brutality.

If there is a criticism of this first-class debut it is the character of Abbie herself. From a professional, smart, tough-talking woman in control of her investigation and herself, she slides into sentimentality with her judgement and decisions suddenly shot, and puts herself and others at risk. But I’m prepared to write that off as sheer stress – and if that’s what the author intended, he’s done it brilliantly.

All round, this is a terrific first novel. It’s well plotted, well written, riveting and eminently realistic.