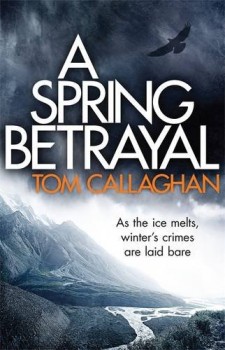 Exiled to remote Karakol, Inspector Akyl Borubaev of the Bishkek Murder Squad becomes involved when the bodies of seven small children are found together, all bearing wristbands from a Kyrgyzstan orphanage.

This book is a follow-up to Tom Callaghan’s A Killing Winter, in which Inspector Akyl Borubaev investigated a series of brutal murders with the help of a beautiful Uzbek woman Saltanat Umarova, leading eventually to the downfall of Borubaev’s superior officer. His consequential unpopularity with sections of the Bishkek police led to his posting to Karakol, on the foothills of the Tien Shan Mountains, on the border with China.

Borubaev is soon back in Bishkek, however, on the trail of a powerful person or organisation who have found a way to abduct children from state orphanages for the most horrific purposes imaginable. Mikhail Tynaliev, Minister for State Security, is in the background as a potential powerful resource, but unwilling to show his hand unless a guilty party can be clearly demonstrated.

Borubaev is thus again working largely unaided, especially after his friend Gurminj, an orphanage director, is killed. Luckily Saltanat again appears, offering to join forces. Borubaev remains obsessed with his dead wife Chinara, and this is sufficient to derail the possibility of romance between the two, but Saltanat is a planner and helps to keep Borubaev from killing himself prematurely. The action is narrated by Borubaev in the first person throughout.

As with Borubaev’s last outing, the book provides a pretty bleak outlook on life, especially life in Kyrgyzstan. Apart from a few mentions of the beauty of the mountains, life is unfailingly ugly. The infrastructure is rudimentary and falling apart, human relationships are all basic and based on self-interest and fear, and the crimes under investigation are the worst that can be conceived. Borubaev himself is not a protagonist that one can easily like, being far too prone to rush in without a great deal of cerebral activity.

Regrettably I think A Spring Betrayal is unlikely to find many fans except perhaps amongst those who favour the films of Steven Seagal, where atrocities by the evil-doer justify the hero clearing the ranks of his opponent’s henchmen without compunction. There is no humour to lighten the mood or clever footwork by way of plot development, just a sullen slog-fest. It’s all so nasty and brutal that the overwhelming sensation is one of distaste.