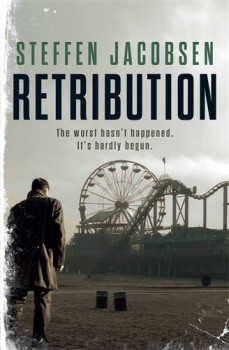 On a beautiful autumn day a Muslim suicide bomber triggers an explosion in the Tivoli Gardens, Copenhagen, killing more than 1000 people.  A year goes by and, in spite of intensive efforts to find the criminals, no arrests have been made.

On a beautiful autumn day a Muslim suicide bomber triggers an explosion in the Tivoli Gardens, Copenhagen, killing more than 1000 people.  A year later and, in spite of intensive efforts to find the criminals, no arrests have been made.

The opening to the novel is in the form of a prologue, telling us who was responsible for the bombing and how the crime was carried out. It is noticeable that, apart from a reference to Crusaders and a mention of western infidels, there is no attempt to justify the atrocity – something that emphasizes the pointless futility of such actions and adds to the feeling of horror.

It is this sense of the horrific that gives the book its impetus. After the Twin Towers and the Madrid and London bombings, it is all too easy to become accustomed to terrorism and it is to the author’s credit that he is able to present and describe the effects of the massacre in such a way that it is always at the front of our minds. One of the main characters has lost his wife and children in the outrage and is deranged as a result. We realise the blasphemous absurdity of a situation in which a man says, “God is great”, just before he presses the button to kill a thousand innocent people. After that, our sympathies are fully engaged with those who try to bring the perpetrators to justice and we look forward eagerly to the bad (and insanely deluded) guys getting their deserts.

This is one of those novels in which nothing is ever quite as it seems and nobody can be entirely trusted. The element of surprise is always present and – with the possible exception of one incident towards the end – always convincing. Nor is it confined to what happens as against what was expected to happen. Lene, for example, suddenly discovers that she has been living her life under a complete misapprehension, though we can understand why. Kim too behaves in a way that we find difficult to believe, though we recognise that anything can be expected from a man who has suffered as he has.

All the characters are well drawn and our interest in, for example, Lene and Michael never flags. Lene in particular is a police superintendent with a difference – one who will ignore official procedure in the interests of doing what she considers the right thing. This is particularly noticeable in her attempt, at the beginning of the novel, to find and help a young Muslim woman who is clearly in desperate straits. Michael, who shares her commitment, is equally well defined as a character and we find ourselves eagerly following their joint efforts to prevent a further massacre.

With the exception of one twist towards the end of the novel, the plot never falters for one moment and the reader is totally engrossed in it. This is partly owing to the author having taken what is an altogether too familiar set of circumstances and demonstrated how utterly perverted are the views that lead people to behave in this way. We have the feeling at the end of the book that there is no limit to the horrors that human beings can inflict upon each other – a depressing conclusion when they claim to be acting in the name of religion.