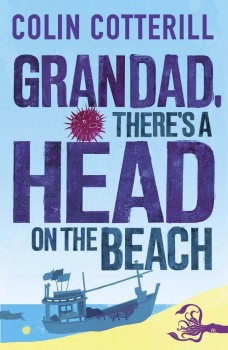 Grandad, There's a Head on the Beach

Jimm Juree lives in Thailand, apparently as a cook in a small beach resort.  One day she finds a severed head on the beach whilst walking her dogs. Her efforts to identify it lead her to realise that there may be a link between Burmese nationals working in Thailand and the deep sea fishing boats evidently to be found operating around the coast. Jimm involves her whole family, mother, brother, sister, grandfather and their various friends in trying to rescue some Burmese acquaintances and to bring some criminals to justice. Also involved are two Thai women who have taken refuge in the beach resort which is in fact run by the family, whose identity Jimm also needs to discover. Indeed Jimm herself is not all that she appears to be at the start.

The description of the beach resort is totally believable, from the series of flimsy huts which are the accommodation for visitors, to the toilet block that is collapsing into the sea, the ever-present beach with its associated flotsam and jetsam, and the family home with its veranda and minimal kitchen facility.  It conjures up the reality of life for many of the people who inhabit the villages that lie on or just behind the white beaches of Thailand. The characters adopt a fatalistic, accepting attitude to the vagaries of the monsoon weather. The feeling that they are totally at the mercy of the sea, the rain and the wind comes through very strongly.

In the first half of the book the relaxed approach to life is conjured up by vagueness in the narrative that very cleverly brings alive images of a society which on the surface at least appears to be very different from that in the UK. Issues of corruption and of equality, relating for example to gender, sexuality and nationality, are all addressed through descriptions of events that happen to the different characters that populate this fascinating environment. The story only really gets a sense of direction in the latter part of the book when the identity of the culprits begins to be revealed. Things become much more focussed once a chase is in progress. Here modernity reigns supreme with proceedings being reported on a live internet feed.

The whole story is an off-the-wall tale with hugely funny interludes or comments on nearly every page. For a newcomer to this series, this is a real breath of fresh air and turning the pages becomes strangely addictive.