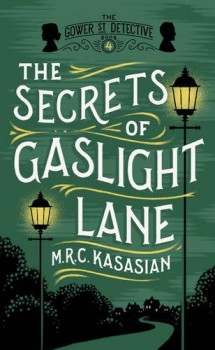 The Secrets of Gaslight Lane

‘Personal’ detective Sidney Grice and his ward March Middleton struggle to unravel the mystery of two killings of members of the same family in the same house, but ten years apart.

You need stamina to be a fan of MRC Kasasian’s obnoxious ‘personal’ detective Sidney Grice and his ward March Middleton. At close to 500 densely-packed pages, dead ends, convoluted plot twists, sarcasm, downright rudeness, almost Bond-ian mechanical inventions and brilliant leaps of detection, you’re likely to be as exhausted as they are. Even keeping pace with the various distractions, such as the malapropisms of Grice’s clumsy, but determined and gutsy maid Molly becomes a major distraction as the Gower Street detectives somehow combine to solve their fourth major case.

A beautiful young woman asks Grice to solve the mystery of the murder of her father. Nathan Garstang was slaughtered in his bed, but there is no trace of a weapon or intruder in what appears a classic locked-room case.

Grice’s interest in the crime is piqued by its link to one of London’s most notorious unsolved murders. Ten years ago, Nathan’s uncle, aunt and their servants were murdered in their sleep in the same house – appropriately named Gethsemane, the Garden of Tears!

The plot is incredibly complicated, given a limited cast of suspects and other characters who have some bearing on events. The story may not be quite as gory as the previous three, but there is an impressive body count.

As usual, the main sideplay is the complex relationship between Grice and March, and his reasons for taking her in are, at last, partly revealed. You suspect that there is much more to come when Grice allows himself to recall the truth during some future adventure.

Once again the eccentric and massively OCD Grice dominates the scene. Sarcasm may be the lowest form of wit, but he has elevated it to a new level where it is transformed it into an art form. With his photographic memory and powers of deduction he rivals that other late Victorian detective, Sherlock Holmes.

His frequently unpleasant displays of vanity add interest and intrigue, but the more gentle March, as the narrator, is more than capable of holding her own. Some of her comments and asides offer real humour to lighten what otherwise could have been a grim tale.

What is so refreshing about the Gower Street series is that they are never quite what you expect – these unusual originals stand out in what is a heavily populated genre. Never pompous, but clever, beautifully written, with some mesmerising characters, humour and pathos, all set in the murk, filth, and thick fogs of late 19th century London, they are always well put together mystery tales for those who want a little more from their Victorian whodunit.