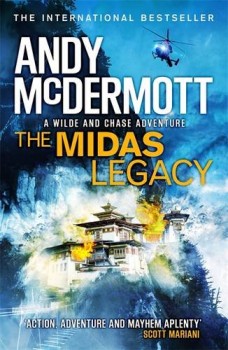 An ancient Codex leads Nina Wilde and Eddie Chase on a desperate race to prevent ancient artefacts of immense power from falling into the wrong hands.

Archaeologist Nina Wilde is determined to carry on living a quiet life – after all, she now has a three-year-old daughter to look after. And talking of domestication, her ex-SAS husband, professional Yorkshireman Eddie Chase, has given up swearing, which is even harder to believe than Nina having discovered the sunken city of Atlantis!

Atlantis is never very far from Nina’s life and, a decade after the discovery that launched her career, the International Heritage Agency, the organisation that Nina once directed, is embarking on a dangerous underwater expedition in the ruins of the ancient city in search of the Secret Codex, and account of the journeys of Talonor, the Atlantean explorer.

Nina watches from the safety of the surface via a communications link while Eddie explores the ancient city. His search is successful, but Dr Lester Blomberg, who replaced her as Director of the IHA is determined that’s where Nina’s involvement will end. He’s not exactly a fan of hers.

Keeping Nina Wilde from a secret isn’t the easiest job in the world, and she’s soon careering around the world with Eddie, in the search for a legendary golden cave that is believed to have spawned the myth of King Midas, who turned everything he touched – including his own daughter – to gold.

Nina and Eddie’s latest adventure takes them from the Himalayas to Iceland and is as riotously entertaining as ever, although with a somewhat gorier edge than usual. You won’t get very drunk if you take a shot every time someone downs a helicopter (just mildly tipsy), but you will get absolutely paralytic if you even take so much as a sip whenever someone is shot, blown up or killed in a variety of gruesome ways.

This time, Nina’s search is very personal indeed. She finds herself following in the footsteps of her parents, and along the way learns a lot more about her family. To her surprise, her grandmother isn’t dead, as she was led to believe by her mother, and Nina has to come to terms with this and other revelations. But motherhood hasn’t diminished Nina’s ability to throw herself headlong into danger, although it does add a poignant edge to her escapades, when she realises that if anything goes badly wrong for herself and Eddie, three-year-old Macy with be orphaned.

The action is as cinematic as ever, Eddie is still as outrageously inventive as ever and, worry not, he does start swearing again! The plot rattles along at Andy McDermott’s usual breakneck pace, with barely any room to draw breath. Ancient artefacts certainly aren’t safe in his hands, and the plots are as dastardly as ever, with Nina and Eddie doing their best to save the world – again. The Midas Legacy is, like all their adventures, fast, furious and fun.