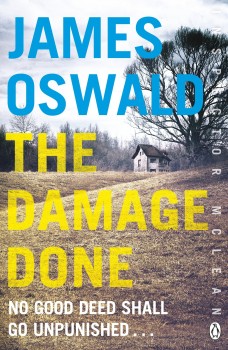 Inspector Tony McLean is working with Edinburgh’s Vice Squad when a high profile raid goes wrong. Their intelligence reports say that a house in an upmarket area of the city is being used as a brothel, but instead, the police get their fingers badly burnt. All they have to show for their efforts is a sex offender who hasn’t notified them of a change of address. As for the rest, there’s nothing to give the lie to the claim that it was just a private party for some people with a lot of money, stacks of influence and somewhat less than mainstream sexual habits.

When McLean finds his investigation not too subtly being shut down, he’s not exactly pleased but, as usual, isn’t inclined to back off, not even when he gets summarily transferred out of his previous role and onto the cold cases unit. The advice ‘when in a hole, stop digging’ has never appealed to him. McLean now has the dubious pleasure of working alongside his old nemesis, former Detective Superintendent Charles Duguid, now retired.

I’ve been following James Oswald’s intriguing mix of Scottish noir and urban fantasy for a while now, and the series has been going from strength to strength. Oswald has a light touch with his elements of woo-woo, far more akin to Phil Rickman’s subtly chilling style than Stephen Leather’s more heavy-handed Jack Nightingale series, with its buckets of blood and very overt supernatural elements.

Read on one level, The Damage Done is an intelligent police procedural with a determined copper ploughing his own furrow and to hell with anyone who tries to tell him to back off. But scratch the surface and there is menace a-plenty, with mysterious twins, shadows of a dark past and things that just aren’t easily explained. There’s also Mrs McCutcheon’s cat, who deserves a series all to itself.

As the series develops, I’ve been developing a real liking for McLean’s former adversary, Duguid, and it was nice to see him still playing a part, despite having retired to the elephant’s graveyard of the local golf club. Cold cases suit him, as does the freedom to rebel that retirement brings, and I hope he continues to make an appearance in the series.

If you’re here for the police procedural side of things, then Oswald delivers a good, solid story. But if you like a frisson of something darker and less easily explained, you’ll be well suited to the other side of Inspector McLean’s Edinburgh, where things have a definite tendency to go bump in the night.