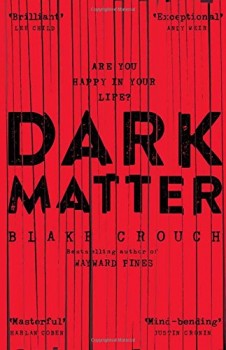 Jason Dessen could have been a famous scientist but instead he chose to marry his pregnant girlfriend and live a life of domestic bliss. This life is shattered when Jason is assaulted and finds himself in a parallel world.

Jason Dessen has lived in the same house for 20 years. He is happily married to Daniela and they have a charming 15-year-old son, Charlie. They are enjoying a regular Friday evening until Jason goes out to celebrate the achievement of an old colleague and to buy ice-cream. He is stripped and savagely attacked, waking in a world where everyone knows him, he has the same name but, although his key still fits his front door, he does not live there. He is, however, a famous physicist, a future he rejected when his son was born.

Jason regains consciousness, surrounded by scientists in protective suits, who welcome him back and clearly expect him to give them information about his experiences.

In this new reality, although much remains the same, much has also changed. Jason is single, and has not married Daniela. In fact she terminated the pregnancy so there is no son. The scientists in the lab where he works are determined to control his actions and behaviours with a shocking outcome.

Once Jason has worked out the impact of his own exceptional and unbelievable achievement he sets out to return to his own life and family, if only he can find the way to do so but this proves much more challenging than he anticipated.

The principle behind this book is one which has exercised the minds of philosophers for many years, the nature of reality and the possibility of multiple realities. As Blake Crouch describes Jason’s attempts to return, he takes the reader on a journey which explores the nature of reality, infinity and probability. Crouch tackles these issues intelligently by exploring them through the eyes of Jason Dessen and also through the eyes of Daniela, left behind in the original setting.

The story flows smoothly and the book is very engaging. The denouement of the plot is fascinating and horrifying in concept and leaves the reader feeling satisfied with the outcome but unsettled by its context.