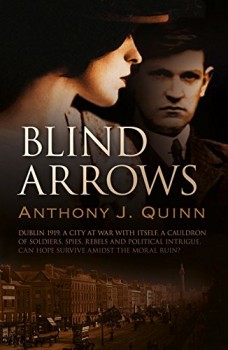 English journalist Martin Kant has a chance encounter with a mysterious woman in a Dublin wracked by violence, treachery and spies as the Irish fight for independence gathers momentum.

This could have been a great book if Anthony J Quinn had kept his own journalistic hat firmly in place rather than the battered cap of the scéalaí – the traditional Irish storyteller given to flights of imagination.

Set in Dublin 1919, the capital of a country at war with itself, this saga of love, treachery, political and military strife and murder engenders a genuine air of menace and uncertainty. English readers may find much of the story uncomfortable as Quinn makes much of the ill-discipline and brutality of the 20,000 British troops stationed in Ireland.

While there had been excesses on both sides, with the growing IRA, as distinct from the more traditional Sinn Fein under Eamon de Valera, contributing its share, the worst was yet to come with the arrival of the Black and Tan auxiliary police the following year.

The charismatic Cork man Michael Collins was a driving force behind the IRA. Nominally minister of finance in the Dail, the self-declared republic’s government, he was also IRA director of intelligence, providing funds and arms and establishing a network of spies among sympathetic members of important branches of the British administration.

The Dublin Metropolitan Police G division was a relatively small political division subverting the republican movement. In July 1919 Collins set up the ‘Squad’ – not as Quinn suggests as a personal guard – but a group whose sole duty was to seek and kill ‘G-men’, other British spies and agents.

Collins and his chief of staff Richard Mulcahy were responsible to Cathal Brugha, the Dáil's minister of defence, but in practice Brugha had only a supervisory role and came to hate the dashing Collins and was largely responsible for the allegations of financial impropriety which contributed to his assassination by anti-Free State rebels in 1922.

If Quinn has embroidered history to enhance his gripping story, his selection of a villain borders on the ludicrous. Corporal Isham is a thoroughly nasty psychopath, but the idea that someone of his rank could requisition a country house with its own pack of hounds and hobnob on equal terms with British generals in 1919 is beyond belief!

Tubercular Daily Mirror war journalist Martin Kant is in Dublin to report on the growing violence and political strife. As a ‘neutral observer’, he is suborned by British intelligence. A chance meeting with a young secretary employed at Dublin Castle, the British HQ, leaves him with a lasting impression – and a mystery intelligence file.

When he learns she has gone missing, he links her disappearance to other female IRA sympathisers who have ‘escaped’ and are now believed dead and suspects there is a sadistic serial killer among British ranks.

His search leads him into the complicated and treacherous world of revolutionary politics, blundering British attempts at a negotiated solution and the mad and brutal domain of a killer.

There is no doubt Quinn can tell a good story. But his all-too obvious passion for Collins’ cause detracts from what is otherwise a superb depiction of the very human side of political strife. The characterisation, with the exception of Isham, is good, and the use of historical figures serves to make the story all the more thought-provoking as it evolves.

Quinn’s style is very much that of a storyteller sitting by the peat fire and this fast-paced dash through the Dublin of 1919, packed with the sights and sounds of the city, its surrounding countryside and the Irish coast and the grime, fear and the smell of the poor and the horses, brings an almost poetical feel to this mixture of crime and spy thriller. It’s just a shame he allowed his flourishes of artistic licence to carry him away!