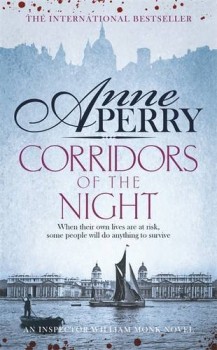 Corridors of the Night

Hester Monk is working in a local hospital one night when a small girl accosts her and begs Hester to follow her down an unfamiliar corridor. What Hester finds is quite shocking.

Life has been going on pretty much as usual. Hester Monk is doing a bit of nursing at the Royal Naval Hospital in Greenwich, covering temporarily for a friend. William Monk, her husband, continues to get to grips with his new responsibilities as Head of the Thames River Police and trying to cope with his loss of memory following an accident at some previous time. He is fully involved in chasing down gun-runners on the river and training his new team. At home Hester and William are both looking after a couple of waifs and strays, hoping to keep them off the streets and into gainful employment in due course.

Whilst on duty at the hospital one night Hester is accosted by a young girl. The girl looks ill and begs Hester to follow her down an unfamiliar corridor. What Hester finds shakes her to the core and the consequences are nothing short of horrendous.

The author is so good at taking the reader back to the past. Victorian London, the Thames, the hospital, are all painted in such detail that they can be seen, heard and even smelled. This period can be truly experienced with the characters of the novel.  The dangers of war and the often unnecessary deaths of those injured due to war or indeed crime, or everyday accidents, is a major factor behind this story. The book brings to light the courage of everyday workers and the constant struggle to manage everyday needs: the clothes are made of heavy wool for example, difficult to manage in the wet and muddy streets of London’s dockland; and the constant struggle for families to find enough to eat.

It is no surprise that principles were sometimes hard to uphold and that families were tempted, as today, into courses of action that appear to offer a better future for their children. Sadly, also like today, there are those unscrupulous people who take advantage of such hopes. As always the book contains a mixture of historical fact and fictional stories to illustrate the likely reality.

Whilst there is inevitably a great deal of description it is woven into the story in such a natural way that a good pace is maintained throughout with periods of suspense and intrigue built in along the way, using the thoughts and observations of the characters themselves.

One thing that can always be relied upon is that the characters of Monk and wife, Hester, and their close friends are constructed to be thoughtful, clever and essentially good. They really care about each other and about other people and care about creating a better future, so making the book an uplifting though sometimes harrowing read.