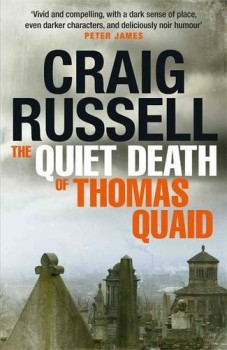 The Quiet Death of Thomas Quaid

PI Lennox subcontracts ‘Quiet’ Thomas Quaid for a simple theft, but things go awry and Quaid ends up dead. Lennox is determined to find out why.

Lennox runs a small office providing security and investigative services in 1958 Glasgow, and tries to put a rather grubby past behind him. He is not averse to the occasional job on the wrong side of the law, however, and when a man with a military bearing offers to pay well for a simple theft, Lennox agrees to set it up.

Lennox contacts his friend Quaid for the job, a quiet man known for his cat-like skills. To both men the job seems a little too well paid, though, and Lennox agrees to assist Quaid as driver. Lennox’s suspicions are further alerted when Quaid apparently falls to his death off a high roof, and the police arrive with surprising speed.

Lennox arrives at the conclusion that Quaid has been set up, and investigation as to why soon reveals fruitful lines of enquiry. For one thing, Quaid is rumoured to have accumulated a fortune derived from his wartime activities behind German lines. For another, an accomplice of Quaid in a recent burglary has disappeared. As the true explanation becomes clear, Lennox calls in favours from friends on both sides of the law to administer summary justice.

This is the fourth Lennox thriller, but stands alone; the author doesn’t bother the reader with extensive back story. Lennox is a Canadian by birth, had an active war with experiences which sometimes bother him, landed in Glasgow post-war after some brushes with the law in his homeland, and by 1958 is attempting to throw off his links with organised crime, and trying to rein in his aggression.

As the story is told exclusively from Lennox’s perspective, his sexist attitudes, enthusiasm for heavy drinking and predisposition to violence tend to make him a challenging protagonist, even making allowances for time and location. His ease of communication with men of different cultures at least does something to relieve the situation, and he shows a capacity to think his way out of tight situations, something which frequently comes in handy.

If I had a problem with the plot, it was the ease with which Lennox was able to persuade men of widely-varying views on one’s obligations to the law to follow his instructions, and the eyebrow-raising powers and abilities of some of the bad guys he is fighting. Nonetheless, it all makes for plenty of action, and the grittier parts of a Glasgow still showing signs of wartime devastation make an interesting backdrop.