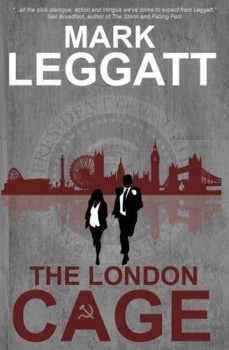 Connor Montrose needs to take control of a secret weapon that could destroy all the communications and defence systems of the world. Meanwhile the CIA are on his trail and want him dead.

The London Cage is the follow-up novel to Names of the Dead which also featured whistle-blower CIA IT technician Connor Montrose. With his former employer trying to hunt him down Montrose has run to the UK where he works for an off-the-grid intelligence network.

With its roots in the Cold war period the story involves American, British and Russian agents all trying to find the secret code that will activate a secret weapon that could destroy the world’s communication and defence systems. Montrose needs to find a way to access the weapon before it is used to start a world war.

Mark Leggatt presents us with a comic book adventure that has the characteristics of a shoot-‘em-up computer game. The action is a continuous chase with explosions, gun fights and violence on the streets of London. The fast pace of the story-telling never lets up.

Although Montrose is the main protagonist around which the story revolves the real hero is his side-kick Kirsty. She is a street-wise, sassy hacker who doesn’t baulk at a bit of violence when it is necessary. Her main strengths are that she not only knows her way around the city, both at street level and hidden, but she is also a computer whizz-kid. Sound familiar? Yes, and like Larsson’s Lisbeth she too has a dragon tattoo – one of the welcome touches of humour.

The characters generally are not complex and the villain is a predictably foul-mouthed murderous bully. As to the plot it is detailed, but not multi-layered. At one point the character of Montrose himself thinks the plot is becoming as complicated as one of LeCarre’s novels, but this comparison cannot be justified. What is lacks in subtlety it makes up in adrenalin. It is full of code breaking, internet searches, CCTV, computer hacking and monitoring mobile phone and wifi traffic. It has the feel of a tongue-in-cheek thriller and will probably appeal mainly to young adult males. This is not a challenging read, but what the heck, roll with it and enjoy the ride.