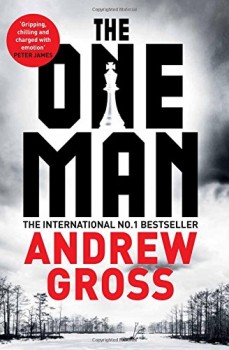 A 92-year-old man in a Chicago care home is visited by his daughter. Although known to have been a Holocaust survivor, he has never revealed any details of his past. She persuades him to tell his story, one that begins with two men running for their lives.

Two men are attempting to escape from Auschwitz – something that, with the help of Polish partisans, they manage to achieve. Not only that, but they are also able to make their way to the United States. They are interviewed by the OSS, and are able to confirm that a man called Alfred Mendl, a Pole, was in the camp, or had been when they escaped. The OSS had tried desperately to repatriate him, but had failed. He is very important because he is a physicist who possesses information vital to the Manhattan Project.

In a meeting at the White House, Bill Donovan, head of the Office of Strategic Services, tells the President that the only remaining hope is actually to rescue Mendl from Auschwitz by infiltrating an agent into the camp and smuggling him out. The President agrees and the operation goes forward. The man chosen is a Polish Jew, Nathan Blum, who had escaped from Krakow in 1941 and is currently working for the OSS as a translator. His entire family had been killed by the Germans and he has convinced himself that when he escaped he left them to die.

The actual introduction of Blum into Auschwitz, via a work party, is convincingly told, as is everyday life in the camp. The horror, cruelty and hopelessness that have become legendary are well brought out without giving the appearance – as is sometimes the case – of having been over-researched. We witness the beatings, the casual murders and the hours of standing during roll call, when prisoners weakened by hunger frequently collapse. We are given details of the ‘food’ ration – hard bread and something rather resembling pig swill – and the-lice ridden bunks in the overcrowded barrack blocks.

Of course, the odds had always been against the rescue succeeding because of the difficulty of locating one man amongst the huge number of people in Auschwitz. Nevertheless, Blum sets about the task, not without some danger to himself from the large number of informers among the prisoners. It is when he finally manages to locate Mendl that things begin to happen and more and more chances have to be taken. He finds, for example that Mendl has been making plans of his own that he is not willing to abandon. These involve a young boy who is an expert chess player and he in his turn becomes part of a sub-plot, along with the wife of the deputy commandant. This rather charming story reminds us that even in Auschwitz there is room for kindness and humanity.

The plot is well constructed and generally believable, though whether a photographic memory – even a very advanced one – could retain such a large amount of incomprehensible information is open to doubt. The final part of the novel is very much a thriller as the attempted escape begins, but not as planned, the Abwehr having got to know about it. Part of the suspense is due to the fact that, whilst one of the participants is the old man telling the story, it is not clear until the very end exactly who it is.

Nathan Blum is the only character of any real depth. He is driven by a belief – although it is not justified by the facts - that he is responsible for the death of his parents and his sister. His volunteering for an apparently suicidal mission is his way of trying to atone for that. This theme of guilt is something that runs throughout the novel and gives it an extra dimension. It is particularly emphasised towards the end, exemplified in the behaviour of another character who finds it necessary to take dramatic action in an attempt at redemption.