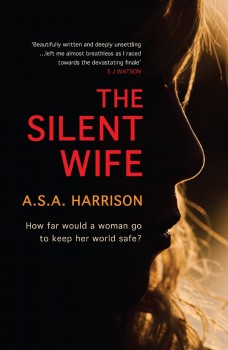 Todd and Jodi have been together for more than twenty years. He is a small, but successful, property developer, she’s a counselling psychiatrist. But life for the long-time lovers is souring. How far is either of them prepare to go?

What an enormous shame A.S.A. Harrison did not live to see her debut novel published. This brilliant psychological portrait of two lovers whose relationship has turned sour has been hugely successful, with its clever, compelling and beautifully balanced expose of the darker side of relationships or marriage. This elegant, perceptive and often darkly funny insight into the lengths to which a person will go when their world collapses has been rightly praised by many.

Todd and Jodi have been together for more than 20 years. He is a small, but successful, Chicago property developer, she a counselling psychiatrist. But life for the long-time lovers is souring. Todd is unable and unwilling to shake his belief that man was not meant to be monogamous – and his latest fling with the 20-year younger daughter of his best friend is about to produce a child. Jodi, who has structured her life around the man she still loves, sees her whole comfortable world collapsing. Both in their own ways reflect their upbringing, but how far is either prepared to go to preserve what they have?

Since Gillian Flynn’s stunning Gone Girl, stories about toxic relationships have enjoyed something of a vogue. This beautifully written and often unsettling book is without any doubt the best of them. As a description of a slow disintegration of a relationship, it’s all too believable – I defy any reader, male or female, not to recognise themselves at least in part. And its greatest strength is the pacing. As the story advances into what could be called dangerous areas, Harrison’s incisive and elegant prose becomes positively rougher, even dirtier. It’s sharp, witty, and completely engrossing in its intricate psychological complexity.

This unsettling tale of two people heading for catastrophe has everything. Characterisation is exceptionally well done, the writing, in alternating voices, mature and it carries enough shocks and surprises to keep you turning pages – and thinking about its implications long after you’ve finished the book.

‘Must-read’ is an often – and not always deservedly – used term. But for the reader who wants a little more than crash bang detective action and who wants to be forced to think about what they are reading, this utterly compelling psychological thriller justifies the label without question and underlines just what a loss to thriller writing Harrison is.