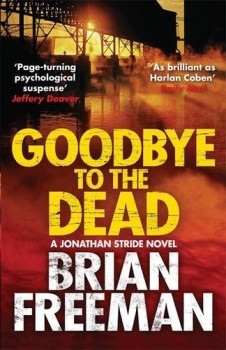 Goodbye to the Dead

Lieutenant Stride is investigating a street killing, and discovers a link to a murder in which he found himself on the opposite side to his late wife years before.

This seventh story in the Jonathan Stride series follows a pattern that regular followers of Brian Freeman’s downbeat detective will by now have become used to. But he does it so well that this split timeline psychological suspense epic will keep you riveted until the final page.

Nothing has changed with Stride, now head of detectives in the Great Lakes port city of Duluth. He remains something of an enigma. He is devoted to his work, fiercely supportive of colleagues and fearless in his pursuit of any case. But he is almost pathologically unable to commit on a personal level following his wife’s death, and is also uncertain and often indecisive.

This strange combination makes him a very different sort of policeman. If you like your crime hard and brutal, set against a background of a struggling city, there’s plenty for you here.

Stride’s wife, the only person to whom he ever wholly committed, died eight years ago, but her ghost hangs over his relationship with his current lover, fellow detective Serena Dial. When Serena witnesses a shooting outside a dockland bar, she stumbles onto a case with roots that go back to the last year of Cindy Stride’s life.

Then the couple were on opposite sides in a celebrated domestic murder investigation. Cindy’s friend, a brilliant but driven surgeon, was accused of shooting dead her husband. Cindy believed her friend innocent, but Stride thought the evidence pointed to her guilt – although the murder weapon was never found. The case led to a high-profile trial in which the woman was convicted.

The current investigation turns up a gun used in the murder of a woman connected to an organised crime syndicate which was the weapon used in the earlier case. The two apparently unrelated events, years apart, seem to have a mysterious connection and as Stride investigates the possibility that human traffickers centred on Duluth are targeting women, he must also face the question as to whether he put an innocent woman in prison. And as he struggles with his doubts, he must also decide whether he will ever be able to make peace with the memory of his beloved wife and commit to a new life.

The jumping between timelines is smooth and never confusing and Freeman’s characters, particularly Cat, the terrified teenage hooker he found hiding in his house during an earlier case involving the murder of her mother and took in, are portrayed both realistically and sympathetically.

He has an unerring eye for detail and some of the minor players – the pushy, politically ambitious prosecutor and a deeply dissatisfied juror who becomes obsessed with the beautiful surgeon – are little masterpieces.

Gradually all the loose ends are drawn together and build up to a surprising, dramatic and violent ending. It’s another great read for Stride fans, but more than capable of converting those who have not come across him before.