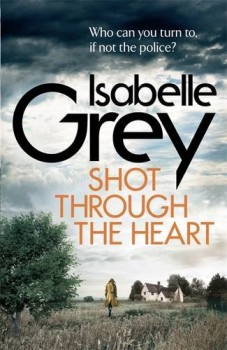 TV screenwriter Isabelle Grey brings all her skills to the second of her DI Grace Fisher series and fulfils the promise of Good Girls Don’t Die with the best procedural thriller I’ve had the pleasure to read in ages.

This unusual tale is beautifully written, full of interesting insights, well-handled forensics and atmospheric settings. It is also unafraid to tackle the effects of murder on both the victims’ and killers’ families and the pressures on a police force struggling to come to terms with the competing demands of political correctness, pride and the demands for instant news.

Part of Grey’s success as a small screen writer has come from meticulous research and I note the names of two former Fleet Street colleagues in her acknowledgements – one a fine crime reporter, the other a committed civil libertarian known for his exposure of police corruption.

A gunman shoots dead five people, including the policeman boyfriend of his former wife, before turning the gun on himself, on Christmas Day in a small Essex town. DI Fisher, now with the county’s major investigation team after her shattering experiences in Kent, must discover where the gun came from and what led to the tragedy.

Her investigations lead her into a web of police corruption, personal vendettas and revenge and as the threats to her own safety mount and the strain of secrecy begins to wreck her friendships, Grace must decide how far she wants to pursue justice – and what the cost will be.

At the same time teenager Robyn Ingold, who lost her best friend in the shootings, gradually comes to doubt her close relationship with her gunsmith and armourer father. The family are a close-knit group, living in relative isolation because of her father’s work.

And a third view of the killings comes from the jaded crime reporter Ivo Sweatman, brought by a young boy to realise the impact on the shooter’s young children, his ex-wife and also the victims’ families left reeling by the randomness of the attack. Sweatman, who witnessed Grace’s problems in Kent, becomes her reluctant choice of ally as she probes corruption among serving and past officers and a hierarchy willing to brush problems under the carpet for a quick ‘result’ – even if to continue means possible career suicide.

As the evidence mounts, she is blocked at every turn by her colleagues, her superiors and the huge – and often misused – power of the police ‘union’, the Police Federation. The murder of an undercover MI5 man investigating money laundering – and the lover of Grace’s sergeant, plus the assassinations of two freed killers, only serve to raise the tension in a complicated and clever story set in the bleak and brooding atmosphere of the Essex coastlands around Colchester.

As a procedural it is brilliant. We see Grace as a leader and the workings of an investigative team, without ever being bogged down by minutia. We also see the police at their best – and worst – her dogged pursuit of the truth set against the indifference and cover-their-own-arse strategies of politically correct senior ranks and the authoritarian form of old style policing where the end always justified the means.