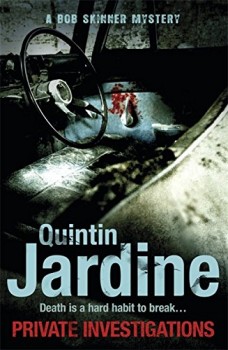 Bob Skinner is back. He’s shaken the dust of Police Scotland off his feet and is enjoying life out of the public eye. He’s reconciled with his former wife Sarah, and is enjoying spending time with her and his children. But trouble follows Skinner like a bad smell, and catches up with him even when he’s in the supermarket – and naturally it’s nothing as simple as some shoplifting.

When a car crashes into his in the car park, Skinner jumps out to confront the other driver. The man legs it, leaving Skinner with a gruesome discovery on his hands: the body of a dead child in the boot. Even as hardened as he is to death, this one rocks Skinner. While his former colleagues take on that investigation, Skinner gets involved in something completely different, and agrees to try to find a multimillion pound yacht stolen from the rich brother of one of his old flames.

Skinner’s world is invariably a complicated one, and it starts to look like the two seemingly wholly separate investigations might in fact be linked, a fact that does nothing whatsoever for the blood pressure of Police Scotland’s new Chief Constable, Skinner’s former best friend, Andy – now Sir Andrew – Martin. Their friendship hasn’t survived Martin’s second break up with Skinner’s daughter Alexis. Yes, I did say second break up – do keep up! Even though it was Alex who did the dumping, that cuts no ice with Skinner. And in Skinner’s world, Police Scotland has been rebranded as ScotServe, just to prove what a bad idea it is.

I used to like Andy Martin, but he’s now been turned into an over-bearing, over-interfering idiot, which is a high price to pay for messing with Skinner’s sainted daughter. And just for the record, no, I don’t like Alex Skinner. Her father and her creator have put her on such a high pedestal that is she ever falls off, it will prove fatal. But probably not for her.

Private Investigations is yet another instalment in Scotland’s longest running police soap opera. You don’t have to have followed the series from the beginning, but it does help when it comes to keeping track of a cast that rivals the number of extras used in a battle scene in War & Peace. On the police side of things, the stars of this particular show are DCI Sammy Pye (I remember him as a lowly constable!) and his sidekick ‘Sauce’ Haddock. Mario Maguire, now Deputy Chief Constable, makes some welcome appearances, mainly to inject a note of robust commonsense into the proceedings and to raise poor old Andy Martin’s blood pressure even further. There’s even an appearance by dishy spy, Clyde Houseman, so it’s not hard to guess that Skinner will soon be having closer dealings with his friends in the security services.

I’m still not sure I like Skinner in the role of a private investigator, and the sections narrated by our hero himself continue to grate on my nerves, but his new role certainly leaves him plenty of scope to stick his nose into other people’s business and, as a shameless soap addict, that gets my vote. I’ve enjoyed watching Quintin Jardine’s motley crew rise through the ranks and I still enjoy the books, info-dumps and all. There’s a lot of life left in this particular old dog.