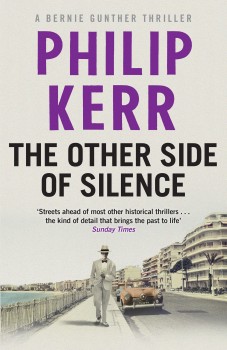 The Other Side of Silence

Bernie Gunther is living a quiet life in the South of France in 1956 when an old enemy reappears, and he is asked to undertake a sensitive task for a distinguished local resident – the writer Somerset Maugham.

Bernie Gunther is keeping a low profile as the concierge at the Grand Hotel du Saint-Jean-Cap-Ferrat, when one morning he sees a man checking in who he has not seen for more than a decade – Harold Hennig. Gunther crossed swords with Hennig when both wore Nazi uniforms, and Gunther has several reasons to hate him, but any precipitate moves now would threaten his continued residence in France.

Soon after Hennig’s appearance, Gunther is introduced to Robin, the nephew of Somerset Maugham who lives nearby, and receives an invitation to dinner based on his skill at bridge. Maugham finds Gunter congenial and before long reveals that he is being blackmailed over a photograph showing Maugham naked in company with a group of fellow homosexuals, and enlists his help to retrieve it. Gunther becomes embroiled in the matter, which turns out to involve spying at a very high level.

This is an excellent thriller which Bernie relates in the first person, and with a great deal of Chandleresque dialogue. In a side-plot, his bridge partner is killed: Gunther fends off the police, deduces the culprit and determines the penance without breaking sweat. Meanwhile, he begins a relationship with an Englishwoman who has been commissioned to write a biography of Maugham.

The main story has frequent connections to real persons of historical interest, seamlessly woven into the narrative. Gunther’s hatred of Hennig is explained retrospectively, beginning when they clashed over the 1938 Nazi plot to discredit Fritsch, and aggravated toward the closing stages of the war when Konigsburg was about to be isolated by the advancing Red armies. Hennig arranged the evacuation of Gunther’s girlfriend on the Wilhem Gustloff, a boat sent to the bottom by a Russian submarine with the loss of over 9,000 lives.

Back in 1956, Gunther helps Maugham to recover the photograph, but it turns out that the blackmailer, Hennig, has a more interesting item for sale – a tape of Guy Burgess giving details of his exploits at the heart of the British Secret Service. Maugham, as a former spy himself, knows how damaging release of the tape would be, and calls in top names to handle the matter. Several of the names involved are well known to anyone who takes an interest in Britain’s post-war intelligence shortcomings.

The balance of private-eye type sleuthing and skulduggery in a period setting, and the reference to real persons and situations, makes for a great read, with never a dull moment. This is the 11th Bernie Gunther thriller and I shall be hunting for the others to find how Bernie survived this long.