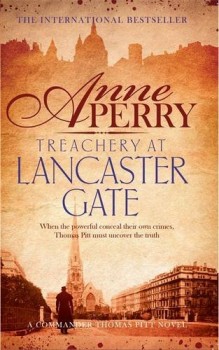 Thomas Pitt is called to a house where two policemen are dead and three badly injured by a bomb – but is it the work of anarchists or a common criminal?

Commander Thomas Pitt is Head of Special Branch. He is called to a bomb blast in a house   in which two policemen have died and three are badly injured. If it is the work of anarchists then it could be a matter of national security which he would need to investigate. Knowing some of the police himself he already feels very involved and so decides that he must investigate further and despite a difference of opinion he involves his police colleague, Inspector Tellman.

This is much more than just a crime novel. It is suffused with an atmosphere that reaches the heart of the reader. Throughout there is a theme of people caring for each other.  Each of the couples, Emily and Jack, Charlotte and Pitt, Gracie and Telling, Vespasia and Narraway constantly seem to worry about their respective partners and do everything possible to help them.

The women are certainly strong characters – rightly or wrongly they play the role of the cornerstone of each family. The main story line also involves a strong friendship between two drug addicts.  Whilst this can all be a bit too good to be true, it does mean that each of the characters is drawn in great depth. Not only do they engage in dialogue, both sides of which are heard, but their thoughts also are made explicit. However, sometimes hearing all the dialogue at a party, for example, can slow the pace down but it certainly also lays the foundation for the rest of the story.

One great strength of the book is the amount of historical detail about life at the turn of the century. There are detailed descriptions of the houses: The sitting room of the police inspector is described in detail: table, chairs, bookcase, paintings on the walls, fireplace, even the basket of needles for sewing. The same is true of the office of the police commissioner: the antique furniture, “a chair with slender legs and a delicately carved mahogany back”, the bookcase with a framed family photograph.

Similar care is given to descriptions of the clothes and even of some of the food. In the home of a well-connected lawyer: “The sideboard held silver dishes of scrambled eggs, sausages, bacon, mushrooms, devilled kidneys, kippers ..... There were racks of fresh toast, butter and several kinds of marmalade.  Graceful silver pots held tea and hot water, matching the silver cruet sets and the monogrammed knives, forks and napkin rings.”

The plot is relatively simple but nevertheless the story becomes totally engrossing.  It is the sort of book that engenders a feeling of relaxation right from the start – the characters are familiar, there is a well-constructed story set within an interesting historical context, the prose flows easily, and the ending is not obvious.  This is a really good read.