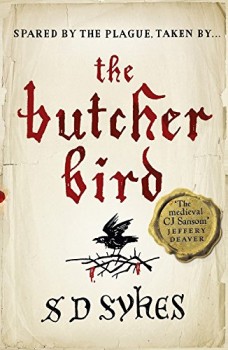 Monastery-raised Oswald de Lacy must grow up fast as lord of Somershill Manor. When two newborn babies are found impaled on thorn bushes, a strange story of a giant killer bird threatens chaos.

SD Sykes’ debut novel introduced her wimpish, accidental, teenage detective Oswald de Lacy, unwilling lord of a Kentish manor. The brilliant Plague Land firmly rooted the monastery-educated Oswald in time and place. His second adventure charts his development in a position he had never sought or even wanted and his forced and rapid growth into adulthood.

But this is far more than a coming-of-age story, although Oswald’s struggles with his own illegitimacy and his tortured relationships with the surviving women in his family provide a fascinating background.

Medieval England is often depicted from the point of view of the military, religious or landed classes. Sykes, with a devotion to detail which would not disgrace CJ Sansom, describes a country society coming to terms with the devastating aftermath of the plague of 1348 which killed between a third and a half of the total population. Her passion for social history – how people lived, what they wore, their food, homes, medicines, farm methods, how they coped with illness, childbirth, washing, their superstitious belief in witchcraft and omens – all provides a totally realistic setting for what is a clever and compelling mystery.

The Black Death changed the face of the country and its social and economic impact virtually ended bonded labour, laid the basis for a hundred year domination of European military affairs by English mercenary companies, led to one of King Edward III’s rare mistakes – he tried to peg agricultural wages at the same rates as before the disease with only half the workers available – and ushered in the beginnings of the modern world.

All this sets Oswald’s struggles in a very believable context. With his father and elder brothers dead, he must act as lord of Somershill Manor. It is a part for which he has no training whatsoever and his monastery-bred naïveté leads him into a number of well-intentioned, but avoidable mistakes.

Faced with the possibility of insurrection among his labour force over the King’s ruling, Oswald, torn between his own sense of justice and the law, tries to do the right thing.

His problems are compounded when a new-born baby is found impaled on a thorn bush – and his superstitious tenants are gripped by the story of a ‘butcher bird,’ a giant shrike. Panic spreads as some claim to have witnessed the huge creature. Then more children disappear.

Convinced the bird is a no more than a rumour, Oswald, as lord, must discover what is really happening, but can expect no help from his snobbish mother and scheming sister

He follows his often pointless enquiries from the plague-ruined villages of his estate to the thief-infested streets of London, where he loses his virginity to a scheming older woman, as he enters on a journey full danger, intrigue and shocking revelations. It’s another riveting read, combining fact and fiction to produce a structured and compelling story.