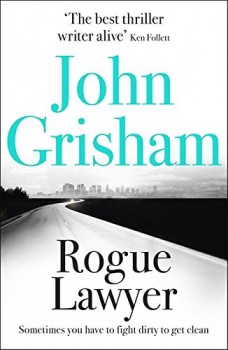 Sebastian Rudd is a US lawyer who takes the cases no one else wants, a policy that leaves him ducking bullets from both criminals and law enforcement.

Sebastian Rudd is a lawyer in a small US city who believes everyone is entitled to a fair trial, and is prepared to lie and cheat to secure one, if necessary. His defence of those accused of heinous crimes generates a great deal of hatred from the public, and from the legal establishment. After his office was firebombed, he operates from a van, and keeps a former client as a bodyguard.

The book relates a few months in Rudd’s life, in Rudd’s own words. In the background is his on-going dispute with his ex-wife Judith over the limited custody he is allowed of his son Starcher, and his affair with Starcher’s teacher Naomi. Most of his time is, however, spent preparing for, or in, court, fighting for clients.

His first case is that of Gordy Baker, charged with killing two young girls. The evidence against Baker is thin, but the police and prosecution have lined up a few criminals prepared to perjure themselves in exchange for lighter sentences, and are committed to their version of events. Rudd finds some conclusive evidence that proves decisive.

His reputation with law enforcement is not improved when a major drugs lord is sprung from death row shortly before execution, when Rudd is the only other man in the room. He comes into conflict with the police again when he defends a man whose life is devastated by a misguided SWAT invasion of his home.

Rudd is drawn into a case of abduction of the daughter of a senior police officer, Kemp, when a suspect, Carl Swanger, is called in for questioning. Swanger offers Rudd details of the abduction. Kemp abducts Starcher to force Rudd to reveal information given by Swanger in confidence. Later, Rudd takes part in an exchange of police cash for information from Swanger which may break the case.

Rudd has an interest in MMA or cage fighting, and a slice of a promising new fighter, Tadeo Zapate. After a fight where Zapate is unfairly denied a decision, he lashes out at both his opponent and the referee, and finds himself on trial for manslaughter. Rudd acts in his defence, and the court process is explored at length in the concluding section of the book.

Grisham continues to extend his lengthy list of publications, and his latest is as readable as ever, with plenty of courtroom action for those who like that sort of thing. Rudd’s personal life and his cases are linked together to make a fairly smooth whole, although the book is more a series of episodes than a single story. As usual, however, Grisham comes up with an interesting protagonist, and a slant on the American legal process that explores some of the stranger aspects of US justice.