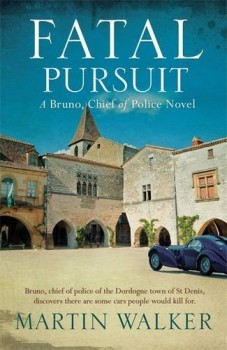 Martin Walker’s series set in the Dordogne is like a comfy pair of slippers – or a day sat beside the River Vézère with the sun on your face. And the lavish descriptions of food and wine will make you yearn for a holiday in rural France.

Former Guardian journalist Walker prises out some of the less savoury details of French history for his hero Bruno to deal with. Bruno is a small-town French cop with a military background, who is firmly embedded in his community, but has useful contacts in Paris, including a former lover.

This time out, the plot is based on the true story of a disappearing racing car. The Bugatti Type 57 Atlantic was known as the most beautiful car ever made – and there were only four manufactured. A Californian museum bought one, Ralph Lauren another, and a third was totalled at a level crossing. The fourth – the one to interest us – disappeared in France during World War II.

Bruno becomes embroiled when two young men, both car freaks, compete to track down the missing car in his neck of the woods. There’s also a dead researcher and possible money laundering for Islamic terrorism in the mix.

Walker’s strength is undoubtedly his ability to construct a seemingly cosy mystery around a point of historical interest. He doesn’t deal in information dumps, though, and the story rattles along with enough background not to either short-change or over-burden the reader.

He’s strong, too, on the setting – I’ve been to one of those night markets! – and on the matter of fact way the supporting cast in the village are there for Bruno. Only our hero’s love life is getting a tad tedious. You don’t have to be familiar with his past history to spot the latest love interest at 20 metres.

But if you can roll your eyes and get past that, you’ll find a thoroughly engrossing and intelligent mystery. And in case you’re as invested in the series as my partner in crime Linda and I are, you’ll be glad to know that Balzac the adorable dog survives!