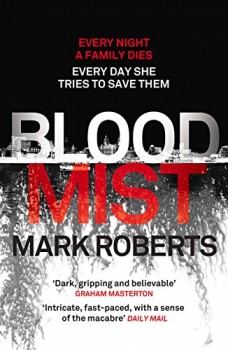 A family is massacred in their home in Liverpool, and another the night after. DCI Eve Clay is caught in a race against time to save the lives of the family who comes next.

Liverpool in the winter: snow, fog, a red sky at night. DCI Eve Clay is the first on the scene of the brutal slaying of the Patel family. Three generations, all dead, the bodies mutilated and arranged into shapes, symbols also drawn on the walls in blood. Before her death, the young daughter of the family manages to make a 999 call, and in the background of the recording the police can hear voices: syllables of words, and another sound, tongues clicking – a made-up language known only to the killers.

That same night, convicted killer Adrian White speaks for the first time in seven years, asking to see DCI Clay. When she acquiesces to his request, he tells her that there will be more deaths, another family, and that the Red Cloud is rising. Despite her vow to herself and her colleagues that she won’t allow him to get into her head, she can’t help but ask herself how he knows these things when he’s had no access to any media or internet for years. In the end, the obvious answer is usually the right one.

On the surface, this is a fast-paced, well-written thriller. But the more you read, the more niggling the issues become. Repetition is one of them – of meaningful quotes from White’s ramblings, and the names of the characters in speech. But ignore those, and it still leaves a writing style that grates on the nerves at times. Alongside that, there’s the character of Eve Clay, the perfect wife, perfect mother, perfect colleague, a woman everyone loves and no one has a bad word to say about, and her fantasy husband who loves her very much and takes time off work at the slightest hint of his wife’s paranoia that the case she’s working is all about her. Why not, when everything is?

But my biggest problem is that this is the third book in a row that I’ve read featuring a Hannibal Lecter-type character calling on, or being called on, by the hero or heroine to provide either puzzles or answers (but never both). This device is now overused, in literature and television. Maybe all homicide detectives have a nemesis, but I’m certain they’re not all calling to gloat from their prison cells, and even if they are, how many cops answer the call?

Having said all that, the mystery of Eve Clay’s birth is a good hook, and this definitely reads like one in a series set to delve further into her past. I like the subtle mix of urban crime and supernatural elements. It’s just a shame the author relies on so many well-worn tropes to bring it to us.