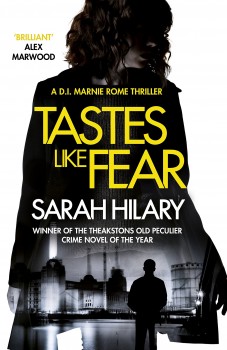 A young girl runs into the road and causes a fatal collision before disappearing into the dark streets of a tough housing estate known as The Garrett, which consists of four brutal concrete tower blocks linked by a series of communal walkways.

DI Marnie Rome and her team are initially hopeful that the girl might prove to be missing teenager May Beswick, but that proves not to be the case. Joe Eaton, the driver who swerved to avoid the girl, is certain about that, so Marnie now has two missing teenagers to contend with. The traffic cops want to catch up with the girl for entirely different reasons, especially when the passenger in the other car dies.

The problem with The Garrett, though, is that no one there is very public spirited, and getting information out of the semi-feral, drug-dealing kids is like getting blood out of a stone and, on the face of it, the adults aren’t much better. The only person prepared to talk to them is an elderly woman holed up in her flat, who regularly complains of being terrorised by teenagers who keep her pinned down, too afraid to venture out.

When a girl is found dead in an unfinished luxury apartment in the once-derelict Battersea Power Station, Marnie’s problems multiply, leaving her in a race against time to find out where the missing girl had been.

Tastes Like Fear is Sarah Hilary’s third book featuring DI Marnie Rome and her extremely likeable sidekick DS Noah Jakes. Noah always steals the show so far as I’m concerned and this is no exception, even though there are no torture scenes this time! He still has his younger brother Sol sleeping on his sofa and getting into bad company, but that doesn’t seem to be putting too much of a strain on his relationship with the equally likeable Dan. In fact, it makes something of a pleasant surprise in crime fiction to find a couple that seem to actually like each other!

Marnie is still haunted by the murder of her parents at the hands of the boy they took in and tried to help, but she’s trying to leave the past behind, with only partial success, it has to be said. What her creator excels at is characterisation and getting under the skin of her protagonists. The pages of Tastes Like Fear are crammed with real people whose lives matter, from ex-soldier Jamie Ledger, working security at the flats where the dead girl was found, to the mouthy teenagers from the high-rise flats and, last but certainly not least, the tough, brave 13-year-old Loz, the sister of the murdered girl.

If you’ve read Hilary’s previous books, you’ll know that it’s as well not to take anything at face value, as she’s an absolute mistress of the art of deception, without ever having to resort to tricking the reader. At first I thought I was reading a simple hunt for two missing girls, but as she gradually peeled back the layers of the story, I realised that she has once again pulled off a very hard trick – that of taking your readers’ prejudices and preconceptions and very elegantly and effectively turning them all on their heads. Her writing is fluent yet concise, the plots are complex without being contrived and her characters are people I want to know more about.