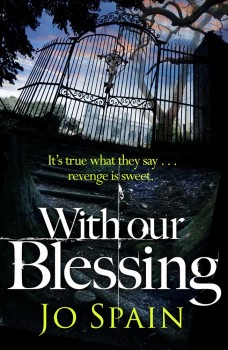 The body of an elderly woman is found crucified in a Dublin park and DI Tom Reynolds must solve a killing which has its roots in Ireland’s darkest past.

1975. A baby, minutes old, is forcibly taken from its devastated teenage mother.

2010. The body of an elderly woman is found in the depths of winter in Dublin’s Phoenix Park. She has been nailed to a tree in a parody of crucifixion.

Detective Inspector Tom Reynolds soon discovers the victim is a nun and Superior of a convent once one of Ireland’s notorious Magdalene Laundries. The Laundries, run by the Catholic Church, were homes for ‘fallen women’ in a past where having a child out of wedlock was a social crime. They were supposed to provide unsettled, difficult or pregnant girls with shelter, medical care and useful work, but many became baby-for-sale factories with their inmates treated like slaves, sexually abused and physically tortured.

To many of their families, bound by the iron grip of the church, these girls simply ceased to exist. Many did, literally – mass graves have been found, some containing bodies whose death was never recorded or registered. Like their male equivalents, run by the Christian Brothers, the Magdalenes were connived at by the Irish government, the police and judiciary.  In a country where no one disputed church supremacy, there was no question of checks.

This is the horrifying backdrop to Jo Spain’s brilliant debut – and the only thing which surprises me is that this is a clever and realistic procedural novel and not a dramatisation of a true story.

Reynolds and his team follow the trail to an isolated country convent near Limerick. Soon an unpopular and dictatorial local priest becomes a second victim and it becomes disturbingly clear that the killer is among them – and determined to exact vengeance for the sins of the past.

This a solid murder mystery in a dramatic and emotive historical setting. But it is Jo Spain’s characterisation which lifts it out of the ordinary. Her policemen are real human beings with real everyday lives, real problems and thankfully realistic dialogue. No alcohol problems, no drugs, no psychological dramas, just ordinary decent members of the garda doing their jobs as best they can.

In what is essentially a story about women – the good, the bad and the too complex and conflicted for mere man to understand – the decent, solid, dependable, Reynolds is the heart and anchor.

Despite its highly charged subject, Spain never allows her story to become overly bleak, largely due to the warmth, humanity and compassion of almost all her characters and occasional touches of gentle humour. Her clear, unfussy prose makes for a riveting, but easy read, with the pace building slowly, much like the investigation with questions and answers coming steadily, to a tense climax. It is possible to guess the killer’s identity, but there are enough diversions to keep readers from being completely certain until the reveal.

The chapters dealing with the Magdalene laundries and the traditions, malpractices and denials of the church are in particular well written, and contrast beautifully with the sharp, contemporary police investigation. Even Reynolds’ own minor and mundane moral crisis has a point to make about the changing face of a country and society as a whole.

This is an intelligent, thought-provoking and finely balanced story, with a huge emotional punch and a particularly good ending. I hope we shall see more of Reynolds and his team. It would be a shame if Spain, having created such a genuine and likeable copper, were to let him fade back into the Irish mist and cold which surrounds this tale.