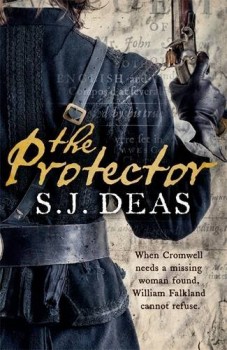 William Falkland is again pressed into service by Oliver Cromwell, this time to find a kidnapped woman whose return is seen as vital to the parliamentary cause.

With the civil war drawing to its close, King Charles in the hands of the Scots and only Oxford, under siege, still holding for the king, reluctant investigator William Falkland is again pressed into service by Oliver Cromwell, leader of the parliamentary cause.

Falkland, once a royalist captain favoured by the king himself, owes a debt to Cromwell, who saved him from hanging after his capture, then used him to investigate a mysterious series of apparent suicides. The Cornish squire, like much of England, has had enough of war. He wants only to find his missing wife and family who he has not seen since he joined Charles’ cause.

An increasingly desperate search sees him start to collapse, both morally and physically. He is rescued by Cromwell – again at a price. He must find the sister of a leading supporter of the Protestant cause, apparently kidnapped from London’s streets, and in return Cromwell will use his influence to reunite him with his own family.

With peace negotiations in the balance and Cromwell’s own position not yet fully established, he believes the woman has been taken by Royalists to influence her brother. With Falkland able to move among both sides – and of proven integrity – he is charged with finding the woman and returning her unharmed. But Anne Agar is not just any woman. She is the elder sister of John Milton, essayist, poet, fervent parliamentarian, enormously influential through his writings and speeches – and a close friend of the man who leads the Protestant cause. He is also a volatile, arrogant bigot, unwilling to give time to any he considers intellectual inferiors, and teetering on the edge of extreme republicanism.

The irony of the search, given he is unable to locate his own family, is not lost on Falkland, as his investigations lead him through the streets of London, its inns, brothels, print shops and political meeting houses to a showdown in East Anglia – where a completely different motive for her disappearance becomes apparent.

Characters from Falkland’s debut in The Royalist return. Cromwell’s spymaster, the loathsome Henry Warbeck and Kate Cain, with whom Falkland becomes more deeply involved, both feature. This story lacks the raw brutality of its predecessor, but the first person narrative, superb period dialogue and clever blending of fact and fiction, plus some unexpected twists, make for a compelling read.

Deas’ command and understanding of the period – most, including myself, never knew Milton had a sister – add to the authenticity and his transformation from the polemicist who produced Eikonoklastes, a defence of the execution of Charles I, into the master who produced the sensitive blank verse Paradise Lost is brilliantly portrayed, as is the onset of his blindness.