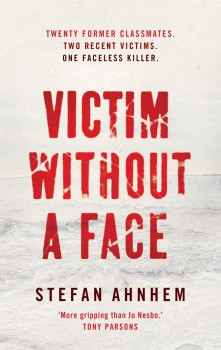 Victim Without A Face

The instant Detective Fabian Risk leaves Stockholm and moves with his family to his hometown of Helsingborg, he becomes involved in a string of horrendous murders of his schoolfriends.

The beginning of this brilliant debut brings positive comparisons with Camilla Läckberg’s style, whose crime series are set in the picturesque fishing village Fjällbacka, on the west coast of Sweden. Yet what could be described as cosy domesticity and violent murder quickly moves towards a grim killing spree even though family life appears to be in the centre of detective Fabian Risk’s world. His ominous surname indicates that nothing is as perfect as it seems.

Risk, his wife Sonja and two children move back to his hometown of Helsingborg, on the Swedish west coast, leaving behind Stockholm, some unfinished police business and implied personal heartbreak. The family want a fresh start, and to enjoy the beauty of the Skåne County, where Sonja can find inspiration for her paintings. Risk, unable to talk to his teenage son Theodor, hopes this phase will pass. But instead of a fun holiday ahead of starting his new job, Risk is thrown into a horrendous murder investigation: one of his old schoolfriends is dead, his hands chopped off and missing.

The killer sends a strong message – the man was a bully who liked using his fists. Soon another horrific murder follows of a thug who kicked with his steel-toed boots. At the crime scene a class photo from 1982, with two faces crossed out, is the only clue. Then a retired teacher, averse to conflict and confrontation, dies of heart attack while holding a similar photo.

It dawns on Risk that all those people who didn’t stop abuse and looked away are also guilty of the bullying, and hence might become victims. Or suspects. Risk’s new boss Astrid Tuvesson is torn between involving him in the investigative team’s work and pushing him away (he’s on vacation after all).

As the investigation moves between Sweden and Denmark, the relationship between two police forces is explored where big brother asks and small brother doesn’t want to listen, at the senior level. Thankfully some detectives have more commonsense to work together, as the hideously inventive and meticulously arranged murders show that the killer will stop at nothing to avenge the past.

Occasional touches of humour lighten the otherwise sombre mood: the woman from a toll booth on the Øresund Bridge calls Fabian Risk ‘my little Wallander’, and I suppose this was Ahnhem’s nod to his work on the famous Wallander series. But the violence and humiliation was too much for me. After reading a page from a bullied boy’s diary I had to skip through other detailed descriptions, even though this was an important element in building the characters and a complex background to the story, explaining how the horrendous abuse shapes people.

The ending of Victim Without a Face veers towards a mood similar to the TV series The Bridge, the genius example of Nordic Noir. Ahnhem’s experience as an established screenwriter shines throughout, and this book is already in production for a TV series. I hope the finished product is as gripping, surprising and tense as the novel.