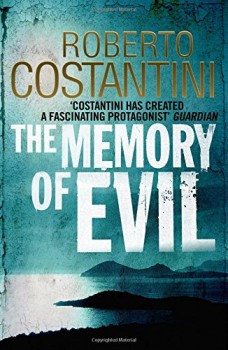 The Memory of Evil

It is 42 years since Colonel Muammar Gaddafi came to power in Libya, the country of Balistreri’s birth. He, however, remembers the year not for that but for the death of his mother – a ‘suicide’ that he has always regarded as actually murder.

This is the last novel in the Roberto Costantini trilogy about Commissario Michele Balistreri of the City of Rome Police. It brings us right up to date, to 2011 and the war in Libya just before the collapse of Gaddafi’s 42 year-long dictatorship.

A large part of the story is concerned with the attempts by Linda Nardi, an American journalist, to investigate rumours of corruption within both the Italian government and the Vatican. Specifically, the people she is targeting are Emilio Busi, a businessman, and Monsignor Eugenio Pizza, both of whom had been friends of Michele’s father when they lived in Libya.

It is made very clear to her that this search for the truth carries considerable personal danger but she is so outraged by the evident corruption in Italian life and government that she is determined to continue it. At the same time, Gaddafi’s dictatorship is on the point of collapse – something that has become a new journalistic assignment for her.

Much of the novel, however, deals with events in Libya before Gaddafi came to power, when, in spite of Italy’s having been defeated in the war, Italian families were still regarded with a considerable amount of respect. The Balistreri servants lived not far away from the Balistreri house but close to the cesspit – something they accepted without complaint.

It is not entirely clear how Michele’s father made his living but it was as a result of corruption in the form of favours and bribery. It is even suggested that he had connections with the Mafia. His mother, Italia, was clearly a very unhappy woman and when one day her body was found, having fallen into a ravine, it was assumed that she had committed suicide – something that Michele has never believed and is determined to disprove.

These two elements of the book are dealt with by frequent time changes between the 1960s and 2011. Sometimes the chapters dealing with the earlier years are very brief and are designed to keep the new reader abreast of the story contained in the first two books. It is by no means clear that this is successful, particularly in the later chapters which read rather like an old-fashioned whodunit. There is also a very contrived ending to the Marlene/Laura/Linda story and, whilst there has been a certain amount of acceptable coincidence in the two earlier books, it is rather overdone here.

The first novel could be described as a police procedural, though Balistreri being who he is, procedures are not always properly followed. The second book, whilst it has a touch of the ‘mystery’ about it, gains a great deal of its effect from the historical detail concerning pre-Gaddafi Libya. This last part of the trilogy has no such firm narrative. Linda’s pursuit of Emilio Busi and Don Eugenio lacks a certain credibility as the walls of corruption crumble and fall rather too swiftly. The plot seems rather insubstantial and there is far too much concern with tidying up loose ends. There is also a tendency to reintroduce characters, such as Piccolo, the tough, strong policewoman, who played a prominent part in the first novel, even though they have no real role in this one.

Were Costantini asked to reduce these three novels to two and keep the essentials of the narrative, one suspects he would do so quite easily and they would contain little of what happens in this book.