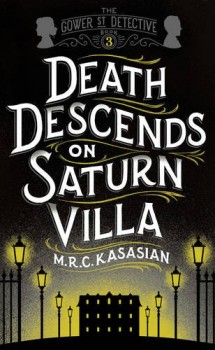 March Middleton is invited to meet her only living relative, a previously unknown uncle. She wakes the following morning to find her uncle dead and a bloody axe in her hand.

I read scores of crime books every year. As a result I am rarely at a loss to follow a plot to its logical conclusion. This third adventure of the Gower Street detective, an often unpleasant character who, in modern medical terms borders on being an autistic savant, and his god-daughter March Middleton, left me confused all the way to its chilling denouement.

For much of the story, I wondered what the author was on about, never mind how it would end. And that is Kasasian’s skill. Endless smoke and mirrors drag you into and through his near improbable, but always entertaining, escapist tales.

It’s impossible to summarise this story. March is invited to Saturn Villa to meet her only surviving relative, her previously unknown and decidedly strange Uncle Tolly. She wakes the following morning to find her uncle dead and a bloody axe in her hand. More killings follow, with March on the spot for every one and arrested and charged with murder by a bullying policeman.

At the same time, she appears to have totally lost her mind. Grice and her admirer and would-be husband Inspector George Pound, wade their way, often not too successfully, through a maze of mayhem and misdirection.

Criticisms? The plot is so convoluted and often repetitive it is almost grotesque. The narrative is fragmented – the story is told by March, by Grice, then by March again. There are ‘publishers notes’, extracts from March’s diary, and recollections from her childhood in India and Lancashire. It all becomes difficult to follow, and it is easy for the reader’s attention to wander. Nor is it helped by familiar characters like Grice’s devoted and endlessly clumsy maid Molly – surely no-one can possibly be so given to malapropisms no matter how funny – diverting attention from the progress of the plot.

Having said all that, it’s a great escapist detective novel with a surprisingly savage ‘poetic justice’ conclusion. If you’re a Grice fan, you’ll love it. If you’re new to the most one-off crime solver of any generation, you’ll need to keep all your wits about you to keep up with the twists and turns, but will be rewarded by its sly humour and sharp observation.

Grice is not for everyone, but if you want a quirky, well-plotted story in a realistic Victorian setting, the Gower Street genius is well worth a try.