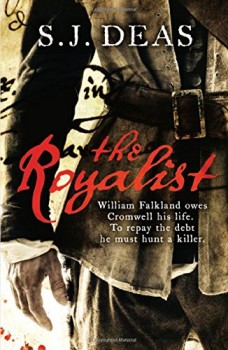 Royalist Dragooner William Falkland awaits death in Newgate. But an incident in his past has reached the ears of Oliver Cromwell, who sends him to investigate a series of mysterious deaths inside his New Model Army.

SJ Deas has set this superbly plotted and atmospheric crime debut during the bloody English civil war – but has avoided the temptation to go for heroic, flawed, warriors, sweeping battle scenes and close-quarter combat. Instead, Royalist Dragooner William Falkland is a disillusioned, shattered, veteran, whose only ambition is to return alive to his Cornish wife and family.

In its own way this is a timeless story, which could be any country torn by internal strife – and if it bears a passing resemblance to the legendary films Casablanca and The Maltese Falcon it is none the worse for it and explained by the author’s love of 1940s and 1950s Hollywood noir.

The year is 1645. Falkland, wounded, captured and awaiting what he assumes will be his execution, is in London’s foul Newgate prison. But an incident in his past has brought him to the attention of Oliver Cromwell, now emerging as far more than a brilliant cavalry commander to become the political leader of the Puritan cause.

Cromwell has staked the outcome of the war and the future on England on his New Model Army – Britain’s first paid and trained fighting force since the Roman legions. Under the command of the tough Yorkshireman Sir Thomas Fairfax, the army, a mixture of Puritans, religious extremists, pressed men including former Royalists, Catholics and the sweepings of the countryside, is in winter quarters in Devon.

But three young soldiers have committed apparent suicide and there is dissent in its ranks. Cromwell offers Falkland, a man who once defied his king in the name of justice, his life in return for his conscience and investigative skills. With his escort, the cold and mysterious Henry Warbeck, Falkland travels across an England divided, plundered, cold and hungry, to find the truth.

The snowbound camp at Crediton is a microcosm of a country at war with itself. The burnt out and cynical Falkland has lost faith with his cause and religion, but has little trouble in seeing the splits in a divided and uncomfortable group and as he probes further uncovers some frightening truths about the New Model Army.

This vivid, realistic tale concisely presents the politics and circumstances without unnecessary extraneous information. The principal characters are great – Falkland a believable hero, Miss Cain, with whom he is quartered, brave and resourceful, Warbeck a man of more depth and subtlety than he first appears. There is a real sense of uncertainty, fear and superstition, compounded by the bitter cold and the brooding presence of the ‘witching tree’ where the boys died. And it all has a solid basis in fact as Cromwell was eventually forced to purge the more extremist religious sects in the New Model Army to ensure continued discipline and victory.

This is a brilliant historical debut from a writer better known as a fantasy and science fiction author. Falkland, almost a 17th century Sam Spade or Rick Blaine, is well worth it.