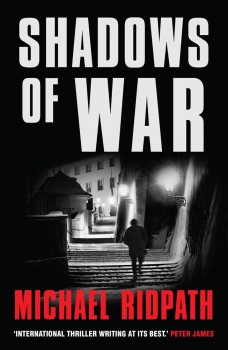 As World War II opens, Britain’s response to German aggression is in debate, and a young Second Lieutenant is caught up in the struggle between those contending for resistance or accommodation.

Conrad de Lancey was at Oxford with Theo von Hertenberg, now an officer of the Abwehr, through whom he is privy to names in the German hierarchy opposed to Hitler. This information was passed on to the Government, who are sufficiently impressed by Conrad’s abilities to include him in arrangements for agents to meet a supposedly disaffected German General in Holland.

The rendezvous proves to be a trap, but Conrad escapes and through his contact with Theo receives valuable intelligence. At the same time, his sister Millie also visits Holland at the request of their father Lord Oakford, who is keen that Britain reach agreement with Germany and avoid another war. Conrad is convinced that his father is misguided, but finds that there are many in Britain who want an alliance with Germany, and are prepared to use violence to advance their beliefs.

This is a work of fiction, cleverly entwined with real events during the first year of the war. Ridpath adds a useful postscript which gives some detail about key facts, and summarises what is known, and what is not, about two big issues touched upon in the book: the Duke of Windsor’s sentiments about the Nazis, and the extent of political support for a pro-German government to replace that of Churchill.

The big difficulty in exploring such major themes in a work of fiction is of course that the reader already knows the outcome, which rather undermines the suspense. There is a certain amount of curiosity to be satisfied as to how the author brings about the historically known result, but essentially the author is battling uphill. A rescue can, however, be achieved with convincing period detail, and characters who bring the plot to life.

Unfortunately Ridpath does not wholly manage to fulfil these requirements. His knowledge of military and political particulars which underlie the plot is doubtless well-founded, but apart from some pretty basic scene-setting there is little to give the action the unique stamp of time and place, the sort of thing that Alan Furst, for example, does so well.

Much the same can be said about the characters. The book is very much plot-driven, so the author perhaps felt that lengthy digressions into the personalities of his protagonists would detract from his pacing, but when the reader is given so little to go on, it is difficult to become invested in the outcome. I felt much the same about the death of a supposedly sympathetic character, and of another who would give Cruella de Ville a run for her money.

Wartime provides great opportunity for the exploration of human nature under pressure, and the book contains plenty of dramatic scenes where Conrad’s mettle is tested. But a thrilling plot alone is not sufficient to really compel interest.