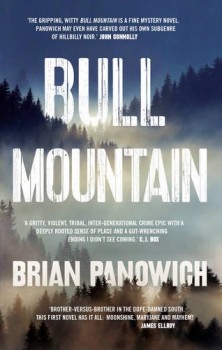 For generations, Bull Mountain in Georgia has been home to the Burroughs family and a base for their illegal activities, but law enforcement agencies are planning to close them down.

The Burroughs family have brutally enforced their control over Bull Mountain for over 70 years, distilling and selling moonshine whisky, moving on to cannabis cultivation and currently making and distributing methamphetamine across the Southern States. A Florida connection, Wilcombe and his biker gang The Jackals, supplies them with raw materials and automatic weapons to protect their operation.

Current head of the mountain is Halford, confirmed enemy of his brother Clayton, who alone of his family has taken a different path and is the local Sheriff. The uneasy stand-off between the two branches of the family looks likely to be broken when Agent Simon Holly of the Bureau of Alcohol, Tobacco and Firearms arrives and tells Clayton that the FBI and other government agencies are ready to move in.

Holly says that if Halford agrees to inform on his Florida partners and abandon his meth dealing, the government will leave him alone, and asks Clayton to persuade him to take the deal and avoid bloodshed. Clayton knows Halford is unlikely to be cooperative, but feels he should make one last try for the sake of the family. Holly’s pitch to Clayton feels somewhat odd, and we soon find that he has been economical with the truth. His agenda is however obscure, and a complete answer is only slowly revealed.

This is an impressive first novel, with plenty of action throughout. The book goes back and forth in time from 1949 to the present, revealing key incidents in the life of the family that lead up to current events. Halford’s readiness for violence is shown not to be new, but a family trait passed from generation to generation. The vicious and sadistic nature of life on the mountain as presented is so extreme that it says something about the quality of the writing that the characters come across as totally believable.

Clayton himself has a tendency towards alcohol, and anger when under the influence, but resists such impulses with the help of his wife Kate, who is rather better than the sheriff himself in spotting when he is being manipulated.

The story picks up pace as it moves towards the inevitable confrontation between the key characters, and ends with some twists and turns which defy expectation. The writing has an easy flowing style and the dialogue feels entirely authentic. This is a characteristically American tale, a dynamic sprawling family feud with sparks flying, set against a big landscape where resentments can smoulder for decades before bursting into flame. It’s a great story, excellently told.