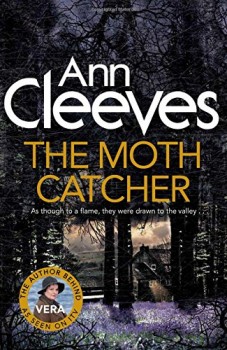 Driving home after a few pints at The Lamb, Percy Douglas, a retired Northumberland farm worker, finds himself having to pull over to answer an urgent call of nature. Having done so, he is just about to get back in the car when he sees the body of a young man lying half-hidden in a ditch. Having finally learned the rudiments of a mobile phone from his daughter, he dials 999 and the police, in the form of Detective Inspector Vera Stanhope, are quickly on the scene.

The dead man turns out to be Patrick Randle, who had a temporary job house-sitting at Gilswick Hall whilst the owners were in Australia. It doesn’t take the police long to discover this but when they visit Patrick’s flat at the big house they find the body of another man, later identified as Martin Benton. Clearly there must be some connection between the two men and the team manages to establish one quite quickly.  It turns out that they share a common interest on moths, though it proves difficult to relate that interest to their murders.

There are plenty of suspects, including three early retired, prosperous and – at least in the case of two of them – somewhat self-satisfied couples, who live in a group of renovated farm buildings, previously part of the Gilswick Hall estate. One of the husbands is a former restaurateur, another a retired academic, whilst the third made his money from privatised security premises. There is also a mysterious character named Jason Crow who has something of a dubious reputation in the local area. The police are convinced that the killer – assuming there is only one – must be local.

Vera has her usual team of Holly and Joe to assist in the investigation. Joe is married with a family and finds that the responsibilities of father and police detective often conflict. Holly is unmarried and unattached, devoting large amounts of time to the job. This, however, is no protection against the often barbed tongue of Vera who uses both praise and criticism to get the best out of her two assistants. She herself is prepared to put in many extra hours to bring a case to a conclusion and she expects the same commitment from them. She is also conscious of the fact that she has a weight problem – something that doesn’t stop her tucking in to sausages and chips whenever the opportunity arises.

The details of the investigation are much as one would expect in a police procedural.  It comes as something of a surprise, however, when Holly – quite out of the blue and rather unconvincingly – comes up with the vital piece of information and thereby manages to prevent another murder. She had begun to feel that the job of police detective was not for her but this success leads her to reconsider. Perhaps she would be even more effective if she were to make a greater effort to develop meaningful relationships.

Ann Cleeves has established a loyal readership, not only with the Vera Stanhope books, but also with the Shetland series. This book is, perhaps, rather less atmospheric than some of the others in the series and the characters and plot more formulaic. The setting is not particularly well realised, in spite of a considerable amount of comings and goings on the valley paths.