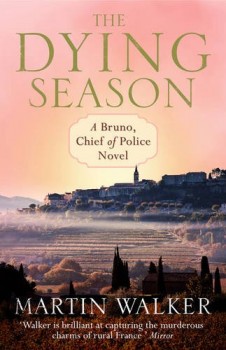 Considering how popular hunting is in the Dordogne, it’s something of a surprise that it’s taken until the eighth book of Martin Walker’s series featuring Bruno Courrèges, chief of police, for this to come to the front of a story, instead of just providing some background colour.

Anyone who has spent any time in the region in winter will be familiar with the sight of men, and sometimes women, dressed from head to foot in orange camouflage gear, standing by the side of the road, carrying a rifle, usually talking on a mobile phone to their fellow hunters, staged out at intervals down the valley or across the hills. They seem to spend an awful lot of time standing around, but every now and again there’ll be a sudden flurry of activity and a volley of shots, and sometimes they’ll bring down a wild boar or one of the many deer who roam the area.

In The Dying Season, hunters are pitted against a local St Denis resident, the eccentric Imogène, who has turned her area of woodland into a refuge for wild deer where the hunters are not allowed to trespass. What might seem to be a harmless enthusiasm for wildlife is in fact causing serious tensions locally as the deer, breeding unchecked, are over-grazing and starting to starve, and their sheer weight of numbers is starting to cause a hazard on the roads. Naturally, it’s Bruno who’s called in to arbitrate when tempers start running high after a fatal accident involving the wife of a prominent local politician.

Deer aren’t Bruno’s only problem, either. Following the 90th birthday celebrations of a local war hero, nicknamed the Patriarch, a man is found dead, seemingly as a result of having drunk too much and choking on his own vomit during the night. The Patriarch is a man with powerful connections both in France and in Russia, and the local big-wigs, including Bruno’s boss, the mayor of St Denis, all seem determined to put an end to any enquiry into the death. But Bruno’s policeman’s instincts are roused rather than placated by the indecent haste with which the cause of the man’s death is declared as being of natural causes and he’s determined to make some further enquiries.

As ever, Bruno’s love-life becomes something of a complicating factor. His sort-of relationship with Pamela, the Englishwoman who stables his horse and sometimes allows him into her bed, has decided to cut him lose. French to the core, Bruno takes this in his stride, but quickly rebounds into the arms of the Patriarch’s daughter-in-law, Madeleine, a keen huntress with political ambitions.

Walker’s strengths lie in the effortless way he conjures up the picture of a small town in rural France with real people and real tensions, threaded through with fascinating insights into little-known episodes in history. On this occasion, the background concerns the exploits of a squadron of French airmen on the Eastern Front in the Second World War and, somewhat later, a failed coup against Soviet leader Mikhail Gorbachev. The history is as fascinating as Walker’s recipes are mouth-watering, and somehow he manages to throw history, politics, food and police work into the melting pot and emerge with something entirely delicious. The only weak spot for me is the somewhat contrived way women tend to fall at Bruno’s feet!

If you haven’t already tried them, do follow his instructions for Sarladais potatoes. They really are superb, especially when served with confit de canard. If you substitute vegetable stock for duck fat, it’s even possible to make a passable vegetarian version of this traditional Perigordian dish.