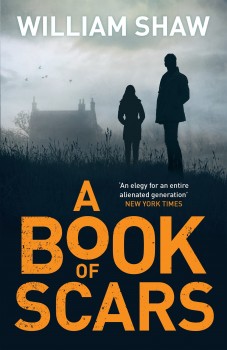 A Book of Scars

DS Cathal Breen is recovering at the Devon farm of his former partner Helen Tozer, whose sister was murdered five years before. When a second killing copies the style, Breen and Tozer investigate – and uncover secrets from the past.

The final part of William Shaw’s dark trilogy deconstructing the myth of the Swinging Sixties is another powerful psychological essay on the lasting effect of crime on the mind of both perpetrator and those closest to the victim.

Despite the naturally conservative and shy DS Cathal Breen and his brash, outspoken former partner Helen Tozer successfully concluding another case, this is really a story about losers.

Everyone has lost: Breen, his fragile self-confidence; Tozer, the ability to act normally; a serial killer his mind to visions of karmic revenge. The supporting cast all fall short of balance in some ways – and some pay with their lives.

Breen is recovering from injury at the Devon farm where Tozer, whose sister was murdered five years before, grew up. Also there is Hibou, a young hippie befriended by Tozer.

Tozer herself is angry and resentful because she feels she was forced to give up her police career to help her parents, a situation not helped when Hibou takes to farming and her enthusiasm begins to restore their shattered lives.

A bored Breen – in the Met the Kray twins are going on trial and Scotland Yard’s tainted Drug Squad is playing hell with rock ’n roll stars – looks back over the unsolved murder of Tozer’s sister. Stranded on the edge of Exmoor, he feels the presence of the dead girl all around him; the place where she was discovered, the silences around the table and even the room he sleeps in.

With Helen nudging him, Breen finds himself unofficially re-investigating the case.

He soon discovers the Tozers were never told the truth about their 16-year-old daughter’s death. She had been foully abused and tortured for 24 hours. But when he tracks down the original investigating sergeant, the man goes missing, but is quickly found killed in exactly the same manner.

One of the suspects in the original case was wealthy landowner Jimmy Fletchet, the married lover of the schoolgirl – and a friend of the murdered policeman. The two had served together in Kenya, involved with a third man in the brutal white settler response to the equally brutal Mau Mau uprising. Breen must go undercover in London’s drugs scene, confront issues about his relationship with Tozer – as well as face unpalatable truths about the British in Kenya.

Shaw uses his two main characters to debunk the flower power, self-expressive myth of the Sixties, presenting a brutally true picture of drug abuse, selfishness, sexism, corruption, and racism. If some of the action borders on the extreme, the writing is brilliant and the attitudes and atmosphere realistic. Whether Tozer and Breen continue their adventures remains to be seen, but Shaw has already done his bit for modern historical fiction with what must be regarded as one of the best portrayals of a much hyped and totally misrepresented era.